Posted by warringsoul on January 21, 2012
There is a great new app out there for iPhones and Androids (appropriately launched on Halloween) called Popcorn Horror! Even if you don’t have a smart phone you can visit their website www.popcornhorror.com and take a look at how to get YOUR own films onto the app. 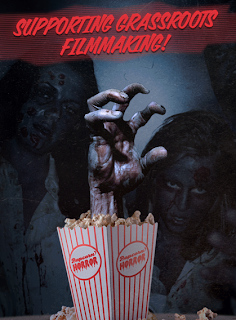 Popcorn Horror is an app designed to bring you the latest and greatest short horror films from around the globe. The concept is great for the fan and the artist – they pay the filmmakers $200 to licence the film and give them a percentage of the funds raised from downloads. For the fan, the app and streaming is free (you can upgrade to a premium pass to download the content and support the filmmakers for only $1-2 a month if you choose to). The films are formatted to fit your phone using a program that recognizes what phone you have and optimizes the streaming settings and images for your screen. It uses the lowest amount of bandwidth while producing the best viewing experience to ensure the films won't bust your download limits. The goal of the app makers is not to get rich, but to bring great short films to the world. Any money raised goes right back to buying more films.

The project got off the ground with a Scottish Innovation Fund grant and it is gaining ground fast. Though the founder is a filmmaker himself, the app contains none of his films because “there are so many filmmakers out there making better films than me and the app is not a platform for self promotion, the app is a work of passion". Popcorn Horror is building its library with a new film each week, the backgrounds are stills from the films, and they will be adding features as the app gains popularity. The designers would love suggestions from the fans. So get in on this app from the beginning and don’t miss the great films coming out each week. (They also have poster and quote sections so even if your film isn't on the app, your poster can be.) All the content is user submitted so go ahead and send them your stuff to show the world and possibly make some money!

Popcorn horror strives to put out the best original films they can find, not rehash the same tired plots or put out low budget versions of Hollywood films and to give you different genres each week. They rely on word of mouth to spread the app to new users so tell your friends! This week another Canadian film: Nuit Blanche will be added. 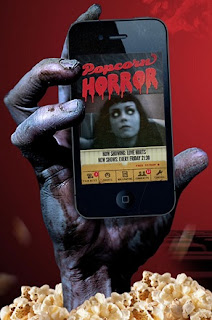 Send in your own films, tell your friends and check out the films!
android app filmmaker films iphone Popcorn Horror