The Crazies – Old and New 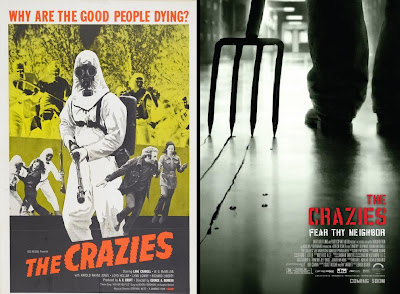 The classic Crazies was a film making a very fearful point about the ability of the military to go in and destroy a town of their own without explaining to the people what was going on and the obvious revolt that would cause in small town USA. Of course there’s also a deadly engineered bio-weapon thrown in and a few good kills.

The new Crazies was a film about a town that became homicidal due to an engineered bio-weapon and is quarantined by the government. The military that is sent in is to be avoided, but there is more terror brought on by the crazed townsfolk. The main characters are kept from the original and the fact that it is a man made virus remains, but there is little of the old movie’s political statement that stays.

I liked both films for what they were. The new movie has some kick-ass fight scenes and some good jokes. It is a little cliché and has a few pop scares that are revealed long before through the score; but if you suspend your disbelief and scientific mind for the film it is a fun ride. The classic has no pop scares and is not as cliché. It surprisingly has more gore than the new film and contains some hilarious seventies special effects. It is an interesting look into the military operation and the suspension of citizen rights in a state of martial law.

Both films are good and worth watching. That being said, if I had to pick between the two movies, I would choose the new film. It leans more towards the horror side and has some pretty bad ass characters.

So, go see either film. Don’t expect to be scared if you see the old one and don’t expect the movie of the year from the new one and you shouldn’t be disappointed. Enjoy!

Ralph said…
I agree with most of what you've said here although I found the gore a little better in the remake. The pitchfork scene, although predictable, was very effective. The 70s version might have had more gory parts, but the aged and budget restricted effects made the scenes a lot less impactful.

As you said though, both films are worth checking out, but I think the remake will be more enjoyed by the masses who won't be able to get past the very low production value of the original. If anything, the remake will spark an interest in the original... which coincidentally was released on Blu Ray this past week.
February 28, 2010 at 9:53 AM