Ottawa Horror would like to welcome out latest addition to the fold - Ralph Gethings of Ralph's Movie Talk! Ralph will be providing us with his excellent reviews of Horror movies, and believe me - he KNOWS horror movies!  Take it away Ralph... 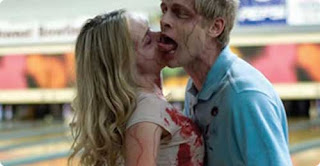 I came by this film quite some time ago and actually was surprised at how difficult it was to get. I did some digging and was finally able to find it on ebay(go figure). You have to have a multi region or region 2 player to watch this. Wasting Away has been making the festival circuit since 2007, so it's odd that we're finally getting news of its release this year (September 28th, 2010). In North America though we will be getting the movie re-titled as Aaah! Zombies!. This is probably due to the fact that there's another film in production called Wasting Away.

So what did I think? Well... Wasting Away isn't your typical zombie movie. It reaks of low budget, but Matthew and Sean Kohnen have written something a little different. It's not quite as funny as it could have been, but different enough to hold your attention. Performances are above average for a low grade flic like this, and the effects are OK, although it could have benefitted from a little more gore. As I said earlier, the story is an interesting take on the zombie genre, offering two distinct views of our undead shamblers. Through the eyes of the living, the undead are.... undead, slow moving corpses bent on eating living flesh. Through the eyes of the zombies, the living are the infected. They move unnaturally fast and talk in a fast helium induced gibber (kinda like watching a movie on fast forward). They themselves look and feel almost normal, although they think they've accidentally ingested some kind of super soldier serum, which explains their ability to withstand gunshot wounds and such.

The way the infected material is introduced to the victims is so far stretched it's not funny. The opening sequence has a barrel fall off a truck and roll what seems to be miles along roads, through the city, and down alleys. The barrel finally comes to a slow rest behind a bowling lane where it nudges up against the stacked boxes of soft serve ice cream base. The cork on the barrel pops and out drips a glowing green liquid. It barely has time to soak into the bottom box before the boxes are dollied into the bowling alley, and there is only a very minor wet stain along the bottom edge of the bottom box. So inside the bowling lanes, dude is getting the soft serrve ready. I can only assume he's taken the carton from the very top box on the dolly... and pours it into the machine. The soft serve base is glowing green, and he doesn't notice it, not to mention it was probably nowhere near the infected spill to begin with. needless to say they all ate the soft serve, blaming the green color on lighting in the alleys... in which there was no green lighting at all... anyways I guess what I'm getting at is, it just seemed very lazy... maybe others will find it funny...

Anyways, the story is different which makes this zombie flic worth checking out. Aside from the story though, Wasting Away (Aaah! Zombies!) falls prey to just about every other problem found in low budget films of this calibre. I'm still gonna recommend it to fans of the genre. It's a zombie film that should be seen at least once if you're looking for a little originality.