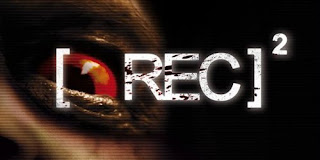 ***WARNING***
This review contains a major spoiler that assumes you’ve already seen the first film. If you haven’t seen [rec], please do so before reading this review.

I had a chance to check out the Spanish film (sequel) [Rec]2 this past weekend and i have to say, I was impressed. Jaume Balaguero and Paco Plaza take their story to the next level, almost comparable to what Aliens was to Alien on a much smaller scale.

'[Rec] 2' picks up 15 minutes from where we left off in the first one, taking us back into the quarantined apartment building where a terrifying virus has run rampant, turning the occupants into mindlessly violent, raging beasts. A heavily armed SWAT team and a mysterious government official are sent in to assess and attempt to neutralize the situation. What they find inside lies beyond the scope of medical science--a demonic nightmare of biblical proportions more terrifying than they could have possibly imagined. Above all it must be contained, before it escapes to wreak havoc on the unsuspecting world outside. - moviefone.com

First, you'll notice that the camera work in [Rec]2 is a little less frenetic than it's prequel, making it a little more digestible. Yes, the [rec] series is shot first person docu-style (Blair Witch, Cloverfield), but don't let this turn you off from this otherwise brilliant slice of horror cinema. Within the first 10 minutes, the film dives right into the action with solid pacing, and building tension. But unlike the original, the exposition comes quickly, and the "what?" is taken out of the equation. Don’t worry though, there are still some surprises... for fans of the original. So, if you haven’t figured it out already, [Rec]2 (and [rec]) is not a zombie film... it's not even a viral infection film (ala 28 days later), no, it’s all about demonic possession, but told within the framework of a “zombie” film. A demon that posseses and spreads its seed through the same means as a virus or zombie outbreak... the saliva or blood. This is what sets this film apart from the masses. It's a new spin on the "infection" story that actually allows some pretty cool elements that would otherwise be meaningless.

Performances are solid throughout, although most of the characters have a very limited life span. Unfortunately this is one of the film’s shortcomings. Unlike the first where we’re given time to bond with the characters, focusing heavily on Angela Vidal(Manuela Velasco), [Rec]2 doesn’t really waste any time with niceties. This could be reflective of it’s very short runtime. Clocking in at just 85 minutes, [Rec]2 holds a solid pace, but sacrifices character development… giving the viewer very little to hold onto in the end.

Although fun, [Rec]2 lacks some of the surprise and creepiness that made the first one so frightening. The gore however, has been ramped up, and in the end, it’s a solid entry to the series. With 2 more films in the works... tentatively titled [rec] Genesis and [rec] Apocalypse, scheduled for 2011 and 2012 respectively, there's a lot to look forward to in this franchise. If you haven't seen the original, definitely catch that first, as this is a direct sequel to it... and after the sequel, you can kind of see where it’s going.