Posted by Sonsey on August 28, 2010
So braving the wilds of the 401, we travelled to the Big Smoke to bring you all the latest and greatest from this year's Festival of Fear. 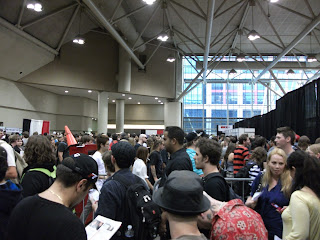 First thing we noticed was the line-up outside the Convention Center, which was somewhat odd... In previous years everything had happened inside. After a little wandering we found the right line (all the way down Front Street almost to Blue Jays Way), and discovered that the convention this year had been moved to the North Hall, due to a medical convention in the South Hall. Once we found the right spot, things moved reasonably quickly, although this years organization of the massive quantity of people left a little to be desired. 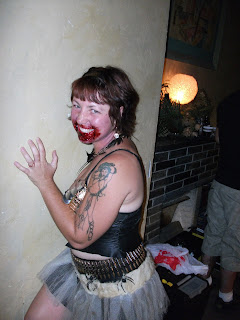 Once inside it was time to track down old friends, see some new stuff and generally get a "lay of the land". This year's Fest lineup looks good, with lot's of vendors, and all the studios showing off their latest and greatest.

Finally we were off the the "Horror in The Hammer" party with the some great live "Zombification" going on.

Day two awaits, and we fearlessly trek in to bring you all the latest and greatest!