We had a wonderful night Friday seeing Long Pigs with the director (Chris Powers) and cannibal (Anthony Alviano - pictured above) in attendance! The acting was superb - it was relaxed and natural, making it seem like a real documentory. There was a lot of research that was put into the film and into the plot and it showed. The killer's expertise with his victims really made you believe he had been killing and eating people for years. All of this added up to a great film. I would highly recommend watching this film, especially if you like serial killers as it has the unique perspective of someone who kills for food and the right taste. 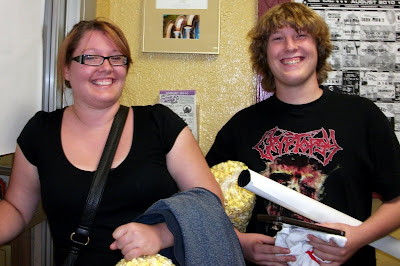 Thank you to those who entered the contest. Pictured is Amanda Delory and her guest who won tickets, a signed shirt, a signed poster and some of the cannibal's own beef jerky!
Be sure to come to our upcoming events as there will be more prizes and more horrifying films!

AmandaTheCannibal said…
It was a very cool movie, I agree! Different perspective on the killer than you usually see.

You can't go wrong with cannibalism.

Anthony McAlistar said…
Hey guys we had a blast