Best Worst Movie Ever and Troll 2 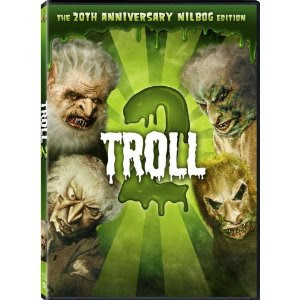 Well, Ottawa Horror was witness to some of the most amazing things to be imprinted on 35mm film. Not only did the Mayfair screen Troll 2 - an epic story of a family visiting the town of Nilbog – but we got to see the movie made about the movie. Best Worst Movie Ever gave us a behind the scenes look at the actors and filmmakers while visiting the fans that keep this movie screening all over the globe.

For those of you that haven’t seen Troll 2 here’s a little bit more information. Troll 2 has nothing to do with Troll, in fact, not once in the movie is the word Troll uttered. There are still little evil vegetarian creatures that fuel the plotline but they are called goblins. The actors made it clear that during filming they had no idea what was going on in the film and that one actor even was on daily passes from the mental hospital to attend the filming. The director did not speak English, but claimed he had complete insight into the minds of American teenagers and that he knew exactly what they would say. To this day he claims that the film is great. The writer of the story (his wife) went so far as to compare the film to Casablanca. Apparently the film is about people and the struggles they face. I don’t think she’s seen the film.

Don't get me wrong, Troll 2 is a movie I think everyone needs to see. It is brilliant, not in the way it was intended, but really there has never been anything so horrifying put on film! If you missed it in theatre that is sad, but you can buy it here: http://www.amazon.ca/Troll-1-2-Michael-Moriarty/dp/B00009PY4I/ref=sr_1_1?ie=UTF8&qid=1290139442&sr=8-1
If you just want to see a little bit of what makes it so famous I recommend watching this clip:
best worst movie ever Mayfair nilbog Troll2