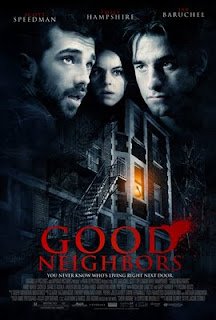 So as you know, Ottawa Horror presented the Ottawa Premiere of Good Neighbours last night, and being your intrepid reporter I'm here to tell you all about it.

For those that don't know, the movie, directed by Jacob Tierney and starring Scott Speedman and Jay Baruchel, takes place in an apartment complex in Montreal in 1995, as a serial killer stalks the neighbourhood. Newcomer Victor (Baruchel) rents an apartment upstairs from Louise (Emily Hampshire) and Spencer - two neighbours who may or may not be romantically involved - on the eve of the 1995 referendum. As the killings continue, the three enter into a dangerous triangle...

I'll admit I went into this movie with very minimal expectations. First obviously "Canadian" cinema (I mean... c'mon... the REFERENDUM?) tends to well... suck. Secondly, both Baruchel and Speedman aren't exactly known for their acting chops - Sorcerer's Apprentice and Underworld anyone?

To my surprise, the movie actually sucked me in to it's world, and held me there. The movie IS completely Canadian, but in the best way I've ever seen. Think "Canadian" in the same sense that Shallow Grave is "British". I suspect using the Referendum as a backdrop was simply a choice to get Telefilm money, but it's only overt in one scene. It's stylishly shot, and it even turns the infamous Canadian "look" on it's head, and features an amazing soundtrack. The story is NOT what you think it is - at least from the synopses you'll see. Think less slasher and more Shallow Grave. If you're looking for a "horror" film - then you will be disappointed - there's very little gore or scare factor here.

The movie has gotten some flack for the acting, and unquestionably, it is the weak point. Speedman pretty much does his one note thing, and Baruchel is this generations Jeff Goldblum - he always plays that same sort of geeky character. Emily Hampshire plays the quirky cat-loving Louise in a wonderfully uncomfortable way, and Anne-Marie Cadieux gets a major nod as the psychotic neighbour. The characters certainly come off as awkward and nervous at the start of the film, but I suspect that's Tierney's decision to make these characters seem quirky. While the mains don't quite have the chops to pull it off, director Tierney manages to recover after the first 20 minutes, and actually draw us in to the weird world of these characters. I certainly found the acting far less objectionable than in Insidious - better writing certainly is a part of that.

The ending was, for me, my least favourite part. Without giving it away, the ending could really have gone three ways, two of which were "easy" and one of which would have been harder, but much more interesting in the context of the film. For whatever reason the movie took one of the easy endings. It wasn't bad by any means - some may even applaud it - but given the rest of the movie, I would really liked to have seen the "harder" one.

Good Neighbours continues it's run at the Mayfair through Sunday, and also Wednesday and Thursday of next week.
movies Review

Joel Elliott said…
Jay Baruchel was fantastic in "The Trotsky"... I suggest checking it out, though it's not Horror.