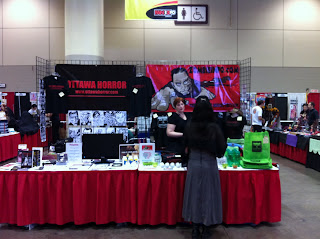 One of the most fascinating things about having the booth at FanExpo this year, was that the Ottawa Horror banner acted almost as a big magnet for all things Ottawa at the Con. I've been at the Expo for the last 6 years, and I don't think I've ever met so many people from Ottawa in one weekend. One of the things often heard was "Ottawa Horror? I didn't know there was a Horror scene in Ottawa?"

Now I'm certain that anyone reading this is aware of the Horror scene in Ottawa, but were you aware of some of the other related ones? The joy of FanExpo is that so many genres - Horror, Sci-Fi, Comics, and Gaming - are all together under one roof. And let's face it, most of us are fans of more than just one genre, and there's always a good amount of crossover - from EC Comics, to Alien to "Night of the Living Trekkies". So in that vien, here are a number of different folks right in our backyard who you just might have something in common with. Check 'em out... they're good people.

Steampunk and Horror often share a lot of fans. I know I'm also a big fan of the whole genre. So I was quite happy to meet Lee Ann Faruga and the crew from Steampunk Ottawa. You can check out their Facebook Group here.


Did you know Ottawa had it's own Goth Syndicate? Well we do indeed,and they're very active. Amongst other things, the plan a Yule Ball, a Summer Picnic, and the upcoming Vision and Voices: The Dark Bazaar - a celebration of all the creative arts with a dark side. Their main Facebook Page can be found here.


Do you love Firefly? I mean really love Firefly? Well so do these folks. They have a charity screening of Serenity coming up at the Mayfair next month as a matter of fact.


Gamer? Oh c'mon it's ok... were all friends here. And if you do enjoy a good game, then you should check out Game Summit Canada coming up Feb. 17th, 2012 right here in the Nation's Capital - three days of non-stop gaming. 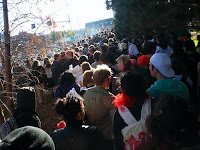 
Ottawa has been hosting a Zombie walk since 2005, but I'm always amazed how many people I talk to don't know about it. Traditionally it's held the third Sunday in October, but you can check out their Facebook Page for the details.

typicallydia said…
Now that it is all laid out in one post, Ottawa looks far more welcoming and cool. The only thing that may not quite fit, would be Death Disco. Not horror, but cool humans.