Posted by typicallydia on December 04, 2011
Professional puppeteer Matt Ficner held a "Build a Beastie" Christmas ornament workshop at the end of November guiding a few artisans through making tiny fraggle-ish or troll-like creatures to deck their halls. The creatures that participants created were creepy-cute with their monstrous noses, glaring eyes, mossy flesh and little red elf hats.

What better man to turn to when you need to creep-ify your holidays than the guy that brought this under-appreciated yuletide classic to the world:

So, Matt Ficner was awarded one of the Ottawa Business Journal Top 40 Under 40 in 2006. He has rubbed shoulders with various guest stars like Natalie Portman and once lunched with Betty White. His puppeteering work can be seen in Mr. Magorium's Wonder Emporium, and more recently in The Thing, among other films and children's television. Then of course his personal Creepy Puppet Project which Ottawa Horror screened a taste of at Zombiefest just over a month ago. We certainly like what comes from the warped workbench of this Ottawa master of an art he momentarily described to me as 'wiggling dollies'.

We spoke about materials, the industry, and future Creepy Puppet endeavours, but often came back to the nature of his creations. 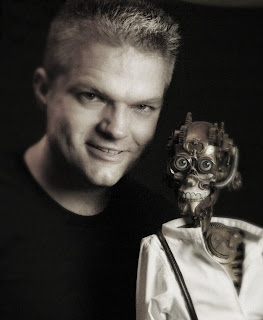 "I definitely tend to gravitate toward the Dark Crystal type stuff where you get the idea it's a creature, a little entity that you can buy into. That these things can interact with you in the real world, and they do. A lot of my work now is to create this etheral world but there is tangibility to it where you feel you could reach in and touch these things."

To him, the highlight of each job is working alongside other artisans such as Tom Woodruff Jr. "He is not only the guy that runs Amalgamated Dynamics, he is also the guy in the suit!" By suit he means some of our favorite sci-fi horror icons, the Predator and Alien. Yeah. That guy. The guy no one ever gets to see through rubber, latex, slime and who know what else. Getting to meet and work with those he has admired in the industry is nothing short of very cool.

Ficner is surrounded by this grotesque and glistening glamour and could not be in a better place. Initially intending to pursue a career in robotic engineering, his creative side won out in high school when he began making contacts in the puppet world (with humans, not puppets), initially beginning to work with Noreen Young, creator of Under the Umbrella Tree. From there, his expertise and experience grew into projects and apprenticeships across North America.

So much more than a suit on a guy or a sock on a hand, his attention into detail, texture and materials is astounding. The zombies and personalities he creates for Creepy Puppet project are creepy not only because of what they are and the ambiance, when you look close, there is a certain 'ew' factor as well. Slick and shiny or flaky dry crepe, every bit is meticulously considered.

"There are other things you can do other than a cute fuzzy round head with ping pong ball eyes. What I enjoy is trying different materials to see what works as a puppet, what works with different ideas. I have some puppets made entirely out of brass - little mechanical robotic creatures - and other made out of plastic. I find inspiration in unusual fabrics and materials and do tend to go through thrift shops and antique stores."

When not working with teams on large productions, he has been chipping away at a few script ideas for a feature-length story. "I have come close to focusing on one and going forward with it in the next little while. I started doing Creepy Puppet Project in 2005-2006 and it has been percolating ever since."

"It's been a great learning curve and I now have grander ideas of what I want to do with this. It's just finding the budget and the time."

Check out more at mfproductions.ca ~