Cool Folks from the Aftermath

So as our readers probably know, we spent Saturday at OGS' Aftermath. It was nice to see something along these lines in the city, and hopefully OGS will be able to make this an annual event.

Here are some of the cool things you missed if you didn't get out:

Liisa Ladouceur (Rue Morgue's Blood Spattered Guide), was the special guest of the event. She had the table right next to us, where she was selling and signing (and wax sealing - very cool!) copies of her latest book "The Encyclopedia Gothica". An A-Z of all things Goth, this is the perfect book if you are Goth (as she says in the intro if you say "I'm not Goth", it's 666% certain you are), know a Goth or wonder what the heck a "Goth" is. A special thanks to Liisa herself for being such a great neighbour at the table beside us and making it a really fun afternoon.

Some very cool Jewelry and clothing from the Big Smoke. I know that Ottawa and Toronto are supposed to have this whole "rivalry" thing going, but everyone in the community I've met from TO has been just great. Be sure to check out her Etsy shop for some great goodies.

Specializing in Recycled Mixed Media work, also Greeting Cards, 4 X 4 Art, Postcard Art and other Paper Goodies. Their Motto: Reduce, Reuse and Redecorate. I was particularly taken by a somewhat demented (and I mean that in the best way) take on Alice in Wonderland. They have some cool Steampunk stuff as well.

WOW! That's all I can say... just WOW. Heather King (aka LocustGirl) is an Ottawa based photography doing some AMAZING things in the horror/dark realm. You really need to check out her RedBubble site. I personally bought two of her prints. Hopefully Ottawa Horror will be doing an article on her work in the near future so stay tuned! 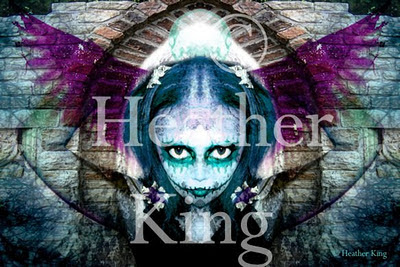