Friday 13th at the Mayfair and assorted horrors!

Posted by typicallydia on January 04, 2012
For the first Friday 13 of the year, the Mayfair Theatre is showing the first of the Vorhees series. It never matters how many times you see it, the Friday the 13th movies are always a fit on this transient holiday!

So where will you be January 13th?

Can't make it, but still want your 'every day is Halloween' fix? Luckily, if you don't have the Halloween theme cemented forever as your ringtone as some of us do, the Mayfair may be able to help you out.

Check their schedule for January 14th and 16th where Beetlejuice will be on the screen and according to the flyer (more on this if we can get the goods) Michael Keaton may be in attendance... so if we all say his name three times...

Fun Fact: My name is Lydia, and I am of sound mind. I was born of a mother with the middle name Orion - the constellation in which the star Betelgeuse is present. Interesting stuff.

Two other tentatively horror-related happenings at our favorite movie house are also coming up this month. Right between one screening of Beetlejuice and the other there is a Lost Marbles movie night featuring The Warriors. While not horror, it is certainly tense and definitely has it's place as a gritty and violent take on the fictionalized gang-land street life of the 80s. This film has been on my mind of late since I dearly wish I were a boy and could dress up as one of the Baseball Furies for Halloween. I am already a little batty~ 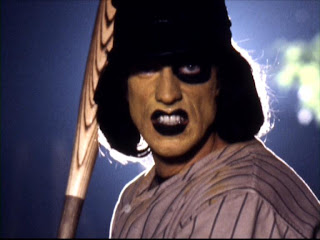 Also, I have been watching a painful amount of Twin Peaks which co-stars a slightly older and better dressed David Patrick Kelly who delivered the memorable line in what is one of the most unsettling moments in The Warriors. And then, if you have not had enough Crispin Hellion Glover will be in attendance for two nights on the 27th and 28th to present part II and I his 'It' trilogy. So far, these are the only announced Canadian dates on his tour. If you are a Willard remake fan, it would do well to see the man himself. So yes, if not for several nights, please do chose at least one to come out to play ~