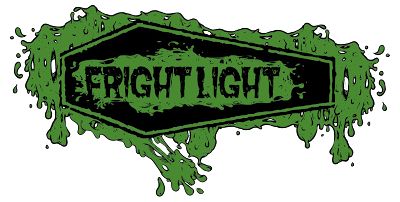 * CONTEST CLOSED *
THANKS FOR ENTERING!

Frightlight, like any smart touring band, will hopefully be heading to Ottawa. Till then, we will be crossing our fingers, or at the very least sacrificing livestock until they swing around again.

Frontman Johnny Pints was in town from the band's home Sault Ste. Marie on a friends and family style trip, so we met up to talk a little horror.

All of the members are fright fans of one kind or another "I'm a fan of the 80s' horror - like Freddy and Jason - that's what I grew up with. My bass player likes all kinds... German horror that no one has heard of, so yes, different horror influences per band member.

He named the band after the creepy lights in Stephen King's Tommyknockers and while researching, found the Halloween flashlight of the same name - it projects ghosts and such on your wall. Not a bad idea for a stage show.

Another of King's old horror novels, It, appears in the song We All Float Down Here. Other films weave their way in like Frankenstein in the EP title, Fright Night, and They Live in an upcoming song. The lyrics and imagery go along perfect with an every-day-is-Halloween ethic, let alone fans of classic punk like Misfits and The Damned.

Frightlight have been around for about three years. While classified as horror punk, they bend their sound from surf, to hardcore and straight-up rock and roll.

While Pints sings, St. Mayhem is on rhythm guitar, Rick Styles on lead guitar, Eddie Fright on bass and their new addition, Chris Freak N Stein, on drums. His first live show was a jump straight in the deep-end with Misfits and Juicehead at the Phoenix in Toronto. you can see some of that set on Tomb T.V. Most recently (last week) they opened for Die Mannequin which marked the new drummers second live show. Seems like an awfully big order, but hey, they delivered. 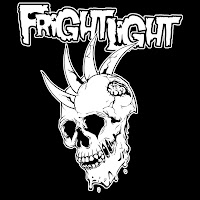 Just for fun, here is the 1-2-3-4 GIVEAWAY.
1 Frightlight t-shirt (large), 2EPs, 3 pins and 4 stickers!
For a full review of the EP check The Sault Metal Scene review.
email contests@ottawahorror.com
tell us your favorite horror-themed band
and we will draw a name via telekinesis
Giveaway closes 5/26 at 13:00


"There are a lot of horror punk bands out there, one in every city," Pints remarks, yet we agree that they can be hard to find. Promotion is the other thing Frightlight does right, after making some pretty catchy music. The logos were the first thing I fell for with these guys, honestly. I'd been fooled by flashy graphics and shiny things before so was pleased when they sounded so tight. Check them out on Facebook, Reverbnation and/or grab their EP It's A...Live! straight from the band on everyone's favorite piratebay. Curiously, it actually IS a live EP; well captured and artfully mastered. A pretty mean feat for any band to pull. And now... an outtake, it you will...

Typicallydia: So you have seen Hard Core Logo II I take it?
Johnny Pints: I have not - it just came out three days ago so I have not checked it out yet. I hope it's good.
TL: It's good. We aren't gonna talk about it (laughter).
JP: The first one was awesome...
TL: You can't not love it...
JP: So, the ending is good?
... (silence)...
JP: I love to watch the ending of the first one just to see people's face when that happens at the end.