House at the End of the Street

Posted by typicallydia on September 20, 2012 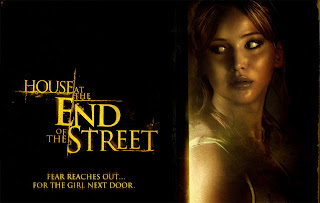 Murder house this, murder house that - it's all comin' up murderhouse. First, I find out I grew up in a murder house. You think that would be the kind of thing I knew... but no. Oddly not. Then, American Horror Story launches a fun viral that lets you search for murder houses... only not really. Then, I get the final blow... a press screening of House at the End of the Street.

You would think I'd be done with murder houses, but no, of course not!

Filmed in Ottawa with filmmakers, cast and crew in attendance there was no way I wanted to pass this up. Mayor Watson introduced the film as 'a very scary movie we are about to see'. Now, I know he is an Ottawa fan, but a horror fan? I wonder.

For a psycho-thriller, it offered a few jumps yet very little blood. Very very little blood. For those avoiding the gore scene, this is a good bet. It played heavily on tension and though it handled the story very well, I could not get over the handheld shake in a lot of the conversation scenes. It actually broke the building tension at some points, in my opinion. There are enough hints at the twists that the story is predictable without being boring and ends without being outlandish. Either would have been a sore point but they pulled it off well.

Regarding the end... without getting into it since it hits theatres tomorrow, is that I certainly heard the word sequel from three different directions as the credits rolled. Not that it overtly states with the ending that there could be. Not at all. From what I see, it would just be fun to revisit this house again.

My favorite thing is that the whole story was that it was very believable as were the actors chosen. I know a drunk chick just like that! I dated that that outcast blonde! And I know those houses. In fact, if I felt the need I could go see those houses which is an extra fun point for me. Many scenes were filmed at Algonquin College too, where I work and graduated from not long ago. It is a testament to the film that I kinda forgot that I was looking for familiar landmarks on the campus I spend so much time on. Kinda totally forgot. That is one of the selling points of filming in Ottawa. Aim your camera one way, and it's New York. Aim it another and it's the Ozarks.

I am interested to see if this film has staying power. So many films follow a similar formula, yet this one does live in a very believable realm. The kind of film that may make you check the lock on your door. Good thing the AHS murder house search tool does not actually work, or there would be a few paranoid people in Ottawa tonight checking on the house at the end of their street.