Posted by Sonsey on June 26, 2009
Okay, I admit to never having been a HUGE fan of Micheal Jackson... However he DID have a couple of connections to the horror genre....

First, as a child he did the theme to "Ben", which was of course a sequel to the classic Horror film "Willard".
And of course, who can forget that he hired a director by the name of John Landis, to create and direct one of the most famous videos of all time... "Thriller". Featuring werewolves, zombies, and a great middle eight featuring the one and only Vincent Price, it changed the way we thought about music videos.
Micheal Jackson died last night at the age of 50, from cardiac arrest...
Click on the image to see the video. 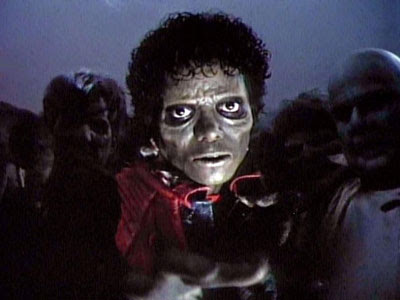