Posted by Sonsey on September 02, 2009
So once again I made my yearly pilgrimage to the T dot for Rue Morgue's Festival of Fear. This year was a  little different. There really weren't a whole lot of movies I wanted to see at screenings, but the celebs this year... well THEY were my draw.

First and foremost was the one and only "Groovy" Bruce Campbell. If you don't know who Bruce is, you probably are on the wrong blog, but for the few uninitiated go here. Bruce is a class act all the way. The Q&A was hilarious, and despite some organizational screw ups with the autograph tickets, I DID manage to get him to autograph my copy of "If Chins could Kill". No that's NOT me in front of him, for those who were wondering. I had to grab this photo after I had gotten his autograph. 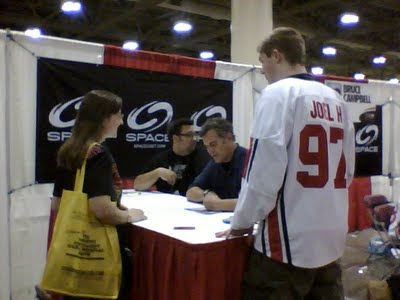 The other guests I was hoping to see were Tom Savini, who was supposed to be doing an FCX Q&A, and director Rob Hall, who I met at last years Fest. Sadly, Savini was unable to make the Festival, and due to the above mentioned organizational SNAFU, I missed Rob's appearance. Oh well... maybe next year. However I did get to hobnob with the Rue Morgue staff, including the one and only Tomb Dragomir, host of Rue Morgue Radio.

Kudos to the Rue Morgue staff for putting on an excellent show. See you guys next year!