Skip to main content
Posted by batturtle on June 11, 2010 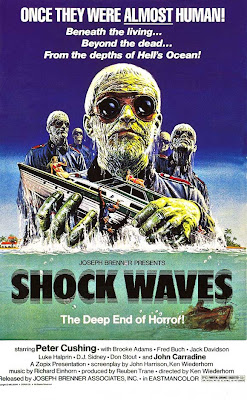 In 1977 Peter Cushing not only blew up Alderaan in Star Wars, but also appeared in Shock Waves. A film that we consider the greatest non-Romero American zombie film ever. And just when you thought things couldn't be worse in a zombie movie, not only are their zombies in the movie...but they're Nazi zombies!
The plot: When shipwrecked yacht-mates wash up on an island run by a former SS commander, they predictably end up food for the aforementioned Nazi zombies.