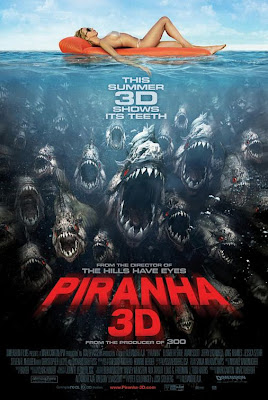 Alexandre Aja's re-imagining of Piranha is finally here and it's here in glorious 3D... well maybe not so much glorious. Touting some pretty big names, Piranha 3D has been making some waves since its sudden removal from the Comic Con venue this year, piquing my curiosity as to how bad (read good) it realy could be. Well, if you know what you're getting into, Piranha 3D is everything you'd expect it to be.

From director Alexandre Aja (The Hills Have Eyes) comes the new action thriller PIRANHA 3D. Every year the population of sleepy Lake Victoria explodes from 5,000 to 50,000 for Spring Break, a riot of sun and drunken fun. But this year, there's something more to worry about than hangovers and complaints from local old timers; a new type of terror is about to be cut loose on Lake Victoria. After a sudden underwater tremor sets free scores of the prehistoric man-eating fish, an unlikely group of strangers must band together to stop themselves from becoming fish food for the areas new razor-toothed residents. The film stars Jessica Szohr (Gossip Girl), Steven R. McQueen (The Vampire Diaries), Elisabeth Shue, Jerry OConnell, Ving Rhames, Adam Scott, Richard Dreyfuss, Christopher Lloyd, and Kelly Brook.

But before I get to the key elements lets talk 3D. I still hate it! Piranha 3D doesn't come off half as bad as some of the upconverted shit like Clash of the Titans. It does however have an iritating inconsistency where the 3D works during some scenes, but completely ruins the picture in others. If you really want to see Pranha 3D, it's best to see it in 2D... unfortunately as far as I can tell, it's only being shown in 3D.

So, the Piranha, they looked cool, but to me they looked a little unfinshed, especially on closeups. The overall design was actually pretty awesome, but the overall execution was a little weak... and the last scene was just a little too much Mega Piranha.

The best (or worst depending on your tastes) parts of the movie were conveyed in the over the top Aja'esque gore sequences. Over the course of 30 minutes or so, there was more carnage then most slasher flics combined. The talents of Howard Berger and Greg Nicotera (of KNB Effects) were showcased in some of the most gruesome death sequences ever filmed. Hundreds upon hundreds of extras washed in blood amongst limbs, eyeballs, and half eaten corpses... hell there's even a severed penis scene, where a few bites are taken, then its swallowed whole, then its vommitted out... The effects crew really went all out on this one with some highly imaginative and pretty realistic stuff.

Piranha 3D is a great film to see with the gore hounds, but keep in mind, it's got plotholes that could sink a ship, some useless characters, and some very silly scenes that just ooze cheese... but really, no one said this is academy material, right. With all it's nudity, it's definately aimed at a male audience... you've been warned. Bottom line, I know for a fact Piranha's not gonna break any weekend records, and unfortunately there are still some relatively new and much stronger films being played... but it was the only new title to hit theaters this weekend. If you know what to expect from Piranha 3D, you might just have a good time... lots of boobs, buckets of gore, and some mean flesh eating fishies!

typicallydia said…
As a gore-hound that is immune to boobs, i loved every minute, even the plot holes! Great review here which made me wish I had seen it sooner!
August 31, 2010 at 8:43 AM