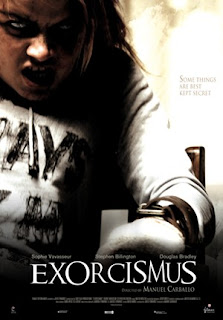 Here's a cool little trailer for an English language Spanish film by director Manuel Carballo. It's actually produced by the same people who brought us the [rec] movies, and stars Doug Bradley (Pinhead from Hellraiser).

"Fifteen-year-old Emma Evans is like any other teenage girl; she thinks that her parents don't understand her. She longs for independence and a life free of family ties and responsibilities and she is prepared to do anything to achieve it. But one day she will be forced to face up to the consequences of her actions.

Life seems to be carrying on as normal, until one day Emma starts experiencing frightening fits. Her parents are convinced that her problems are either medical or psychological, but when doctors´ tests are unable to draw any conclusions, the family is forced to look elsewhere for answers.

It all started off as a bit of fun, Emma never really believed it, but the truth is there is something dark and sinister within her, and it won't take long to surface."

Exorcismus is just prepping for the festival circuit, so we probably won't be seeing it until the new year.

typicallydia said…
Now THAT is a possession! Hope this one does not leave my radar as it looks great, and I have a soft spot for [rec] and pinhead
August 26, 2010 at 9:35 PM