Posted by Ralph on September 10, 2010
Well, I got out to see an advance showing of Resident Evil: Afterlife last night. Before I tell you what I thought though, let me explain what Resident Evil is to me. Resident Evil is the longest running zombie killing video game franchise, a franchise I'm very fond of. The movies, although far from perfect, have always been a guilty pleasure... I mean c'mon, hot chics, big guns and lots of the undead. Each of the films had its own merits and was fun for what it was. The first film was written and directed by Paul W.S. Anderson, and was a triumph for video game to big screen adaptations. The second film however, fell of the tracks with first time director Alexander Witt (hasn't qactually taken the director's chair since). The third film arguably my favorite, was directed by Russell Mulcahey (Highlander). So what did I think of the fourth installment? Once again Paul W.S. Anderson writes and directs what I can easily call a close to perfect 3D zombie epic!

In a world ravaged by a virus infection, turning its victims into the Undead, Alice (Jovovich), continues on her journey to find survivors and lead them to safety. Her deadly battle with the Umbrella Corporation reaches new heights, but Alice gets some unexpected help from an old friend. A new lead that promises a safe haven from the Undead takes them to Los Angeles, but when they arrive, the city is overrun by thousands of Undead - and Alice and her comrades are about to step into a deadly trap.

First lets address the 3D. We all laughed when Anderson stated that Afterlife was going to be a high calibre 3D piece, filmed in true 3D, not converted. On top of this, if you know me, you know I absolutely hate the 3D trend. So here's the thing... yeah I'm gonna say it... Resident Evil: Afterlife's 3D is as good, if not better than the 3D in Avatar! The 3D in Afterlife is as close to perfect as I can hope to ever

expect from film. It's at that point where you don't even feel the glasses anymore that you realize that the film has hit a home run (technically). I can't stress enough that this film needs to be seen in 3D!

Next, the performances... excellent on all counts. I mean c'mon Ali Larter and Mila Jovovich, they're very easy on the eyes, but they really took to their parts. Noteable performances from Shawn Roberts (as Wesker),Boris Kodjoe (Luther West), and Wentworth Miller. Resident Evil is supposed to be cheezy fun, but I found myself actually caring about a lot of the characters... and when a certain somebody comes walking out of the sewer at the end (no matter how improbable), I cheered inside! 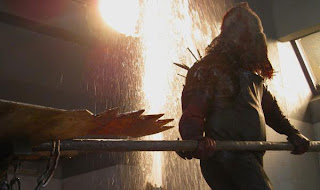 The FX work was also top notch. Some of the CG on the wormy mouth stuff was a little rough in areas, but really not noticeable if you let yourself be taken by the film. The gore isn't over the top, which is a little disappointing, but the film itself makes up for that. Axeman is fantastic, and even the dogs were well done. The zombies looked great, but the action was so intense, you really didn't have time to study any great detail. The horde scenes looked friggin amazing... and I have to say, everything I thought looked super cheezy in the trailers... well, it all really came together, and worked great in the film!

Oh, and I can't not mention the score... WOW, the score is an adrenaline boost from start to finish. Remeber the first Resident Evil... the distorted heavy tracks that really helped complete the experience. Afterlife has one of the best scores I've heard in a long time! It's heavy, fast, and it totally fits the pace of the film!

I'll be honest, after the first 20 minutes of the film I wanted to push "pause" because I just couldn't wait to talk about what I was seeing! I haven't felt like that in a long time. Resident Evil: Afterlife is by far the best genre film to be released this year... easily, and dare I say its definately in my top 5 for the year... and also the best of the series! If you liked any of the past films, you will absolutely love this one! Resident Evil: Afterlife is not just another zombie flic, its also a kick ass action flic!

Warning: I'm gonna kinda give you a little spoiler here... Afterlife clearly sets you up for a sequel, in fact it ends abruptly, just as something big is starting up. Fortunately though, I was so satisfied with the overall experience, I felt nothing more than a pinch of excitement at the thought of more to come!

I enjoyed the hell out of this film and am giving it a 4.5 out of 5

typicallydia said…
You make a point that had impressed me, but been forgotten - the score! it WAS wonderful. I even forgive that they used Kronos Quartet Hope Overture yet again in a film, but the revamp was pretty hard hitting.
September 10, 2010 at 6:58 AM