Posted by typicallydia on August 13, 2011
Necromentia is horror-lovers horror. Regardless, after reading so many mixed reviews, I put it low on the watch-list and until recently, it was not even on my radar. What had me tune in was being told by an Ottawa songwriter that I have listened to for a number of years that his band is featured on the soundtrack.

They have gained attention in fits and bursts since 2005. Tracks featured on high caliber compilations, EPs, and a long-term presence on the web, had sparked a following of ardent fans worldwide, club-centric and otherwise.

I adore industrial and electronic music and often think entire films could be wrapped around a song, let alone a bands repertoire. It just fits better than some of the trashy nu-metal and acoustic fluff that ends up attached to a grisly scene. Not to mention 70s throwback hits.

In this case, to my delight, a song was wrapped around a film. My first question: Has Encephalon had songs in other movies or been approached about upcoming film scores? This was me: wanting to see and hear more.

Matt filled me in. “The Claw was written specifically for the torture scene, Pearry Teo sent me an edit and it was so brutal I wrote the song pretty quickly around it.” Brutal is right, but I must say that the scene without the movie is abrasive. Being singled out takes it out of context. Within the film, this scene it is not as much wanton brutality as it is the perfect slice-of-life from a main character. This clip is Not Safe For Work, depending on where you work...

Although picked apart by most with default comparisons to other films in the genre (Hellraiser, Saw, Hostel) I was entranced with Necromentia. The effects are fine, and though the otherworldly ghouls have similarities with many others, they have new and distinct personalities. There is nothing new under the sun, right, and I am happy to see filmmakers bend what shadows there are left.

Being doubly impressed with the music and sound design throughout, I knew others were too. The film garnered a mention in Fangoria. As they see it, the soundtrack is the saving grace and only real reason to see the film. Duly noted.

This is not Encephalon's first meld into soundtrack though, as other songs have been picked up. Previously, the song Rise was featured in The Gene Generation, “both of which were directed by Teo," explained Gifford. The producer became a fan after hearing Encephalon played at industrial-clubbers mecca Das Bunker in Los Angeles.

Ottawa director Laszlo Kovacs and the Key Pixel Gathering of Filmmakers have recently used Luna's Rampage from their 2009 EP Drowner for the trailer of upcoming indie cyberpunk film, Abstract Messiah.

So, there has been something for filmmakers to cling to, and now the fans will be getting what they have been begging for.

The Transhuman Condition, their first full-length album will be released November 2011 on Dependent. The package is described by Gifford as “a fantastically dark electronic epic containing 12 intricately crafted tracks that reflect my view of Humanity’s Evolution from a personal and a philosophical standpoint.”

To clarify what drives the sound, and concepts they value, he said, “I believe as technology improves we will have a chance to merge with it to create enhanced forms that could theoretically explore the universe peacefully forever, but in our present state of corruption, commercialism, and egos running out of control I think even if we could attain some technological singularity it would most likely result in a dystopian direction with our immortality becoming a threat to the universe." 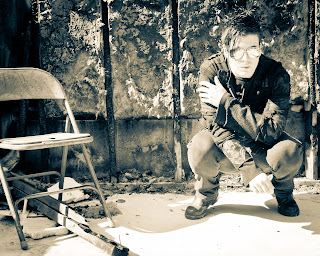 "Throughout the album these views and other themes of isolation and alienation are intertwined detailing the struggles of an individual’s personal evolution parallel to that of humanity as a whole.” Any attempt of mine to describe the place these lyrics are coming from would be wasted words as no one could paint that picture better than the songwriter. A glance at lyrics, such as those to Rise would have a similar effect.

Although violent scenarios recur in Enchephalon’s lyrics, and their sound is at times a prêt a porter soundtrack for surrealist horror, this is not the drive nor the goal.

“What influences my music? Mostly a need to silence some sort of existential crisis,” said Gifford, when asked about some of the dark themes explored in past releases.

“Mutilation [blood, killing, death] come up in my lyrics as metaphors to illustrate the concept of Ego Death or as imagery to set a tumultuous scene or mindset. I suppose whether it is music, film, or news media, blood has a tendency to hold ones attention. Violence has never been something I concentrated on lyrically,” said Gifford, “and I am rather opposed to most forms of it outside of entertainment.”