The untoward, super-cute and downright gory with artist Adam Tupper

Posted by typicallydia on January 15, 2012
One thing about Adam Tupper is that he does not like spiders. Not to say he is afraid of them. He understands them. After realizing the phobia, he researched, now knowing more about arachnids than any sane person should know. He didn't understand why they were frightening to him, what their (yes, the spiders) motivations were, so he set out to learn.  Teaching himself is something Tupper has done since first beginning to draw regularly at the age of ten.

He attended Dalhousie University in Halifax for fine arts, took classes at the Nova Scotia College of Art & Design, then to York University for a short art course. "I think school is great for people who have direction. I have too many interests! I can't be at school because it's all these fragmented courses... if I want to learn something I'll teach myself."

Moving to Ottawa in 2007 he at once began to produce heavily and regularly so not a day goes by that he is not drawing. You may have seen his art around town as he contributed to Basement Artists from July 2010 to this past November. He is also a regular vendor at various conventions.

There is a chasm between his most popular motifs - horror and uber-kawaii fusion designs. "When I started this I knew I could not do shows and just do one thing. Hello Kitty is great, its fun, it sells. Now of course it's an art project I took on that got very big. It's a great project for a creative person since you have to take these complex designs and ideas and break them down. Completely opposite of the horror stuff which is highly detailed and thought-out design, set up to horrify." 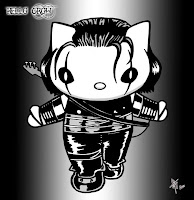 "Since I was ten I have drawn horrible things. Drawn monsters, drawn zombies. I like the idea of shocking through imagery. I like the idea that you can take something that is very innocent and make it horrible. When I started doing the Hello Kitty work, a lot of it was horror mashup. Freddy Kreuger Hello Kitty, Jason as Hello Kitty, and it went over huge! People loved it, so then it moved on to superheroes and pop culture."

He is aware that those who like the cute mashups, heroes and villains, may not like the extreme horror work that he enjoys doing. At conventions, he keeps a book of darker fare open to one of the most sinister and visceral prints. There is a story of a girl who was browsing his table, then stumbled upon the horror. She verily shreiked, exclaimed how horrid and terrible it was. How shocking and scary it was. Hours later, she returned to buy the zombie piece that had scared her simply because she 'had to have it'.

One favorite character of his is Satellite which Tupper said in his deviantart gallery, "appears all over pretty much everything I'm involved with. I'd explain what and why, but this is art and it's always better when people come up with their own interpretations." He mentioned that there is some art that "is a really great excuse to draw hair because I love drawing hair," and if anyone has awesome hair it is this Satellite girl that we know so little about. 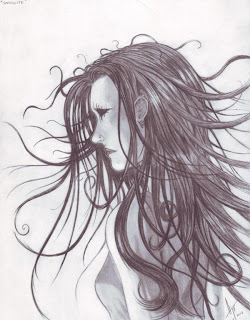 Being art director and co-owner of Ottawa Natural magazine may appear out of gamut compared to his horror and pop culture art. It certainly is fit for the design minded guy who also produces art under his own company, AT Design Inc.

Vis a vis his layout and design skills, he worked on a very short-lived comic series called Corpsewood.

"Corpsewood was part of a comic book project I worked on in 2006-2008. It was for a horror anthology series called Psychotronik Comics. Only one issue was released but it was the first time my work had appeared in comic form so I was pretty excited. Corpsewood itself centred on a vampire hunter named Butch who, along with a vampire priest and a warlock, fought evil vampires, werewolves and zombies." The second issue did not see the light of day though the concept lingers. 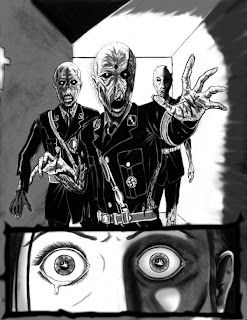 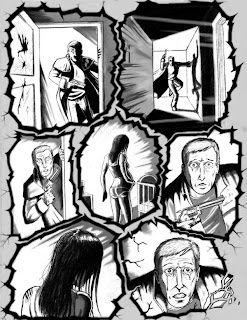 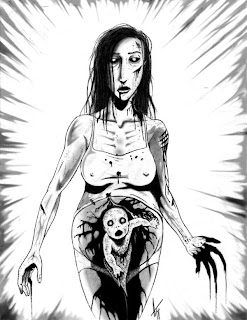 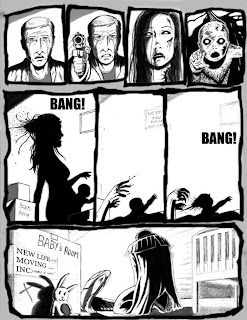 "The movie that scared me the most when I was a kid was Aliens. I didn't fall into the traditional motifs, like Nightmare on Elm Street I just didn't find it scary. Things that really disturbed me would be Clive Barker, his Tourtured Souls stuff and Hellraiser. There are so many good ideas adapted so cheesily, you know its fake. Now something like The Thing, now, totally horrifying, totally a horror film, totally perfect, but you can tell it's fake too. What I liked about Aliens, is most of it looked so real." If fact, he had a hard time watching the Aliens series until he was a teenager.


So, he took back Aliens, forcing himself to watch and love the films, much like he took back spiders... mostly. When asked if he draws spiders, since he pulls so much darkness out of his imagination, he pointed out one piece but could think of others. He has pretty much licked his fear of the eight-legged, though his home is prone to the puny beasts.
"There is one room in the house left that is.. well... I can't go in there." He laughed and said, "you know the room in Blair Witch where it's all dark and scary and there is a guy in the corner, well it's like that but with spider webs. So... ya, I'm not goin' in there. It is literally 'that' room from 1947, covered in webs, right from a nightmare, where there must be a giant spider-creature living."

Tupper would like to spend more time in the coming year pulling the fear from the shadows, if not from the spider-room. This beast pictured below is the most recent in that vein. Exclusive for the week to Ottawa Horror (Thanks, Adam!) this is where his mind is taking him at the moment. It is really that hot off the press~ Revisiting the classic monsters of film - Dracula, Frankenstein, et al - and making more cute things "gross or dead", "zombiefied or monsterfied" is on the slab in this mad artists lab. 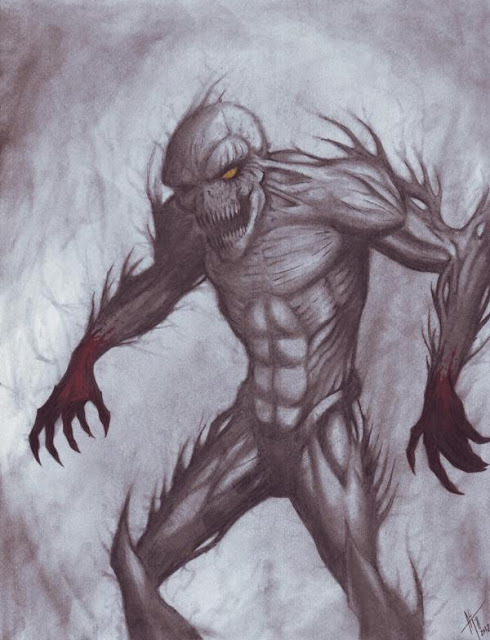 You can view more of his work like his wondrous Cthulhu piece at Ottawa's holodeckgalleries or pick up Tupper's Hello Horror gang at society6. Contact him anytime through twitter or adamtupper.ca.
adam tupper Art Pop typicallydia