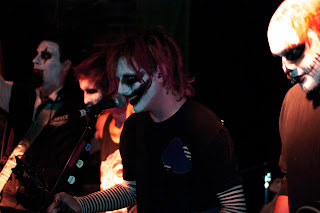 For dead guys, Patron Saint of Plagues never speak ill of their dead. They just don't speak about them. Trying to learn more about Ezzo is like pulling teeth. Asking what happened to Dread is like putting those teeth back in again and nearly impossible. With Dread gone, and Deadboy taking up a different instrument, the last gaping wound left to suture was a new bass player. Enter, Robbie Graves.

Not the quietest cadaver in the group, off-stage he is a viable counterpart to the psycho frontman, Opi. This balances out the nearly dead silent Bonez and stoic nature of Deadboy, who he has technically replaced. Robbie took over bass and Deadboy gravitated to his natural instrument, guitar.  "I was a guitarist before and have been kind of filling holes in PSOP," said Deadboy, "The biggest change was having a band member pass and have a new one come in with no experience in a band setting who jumped in with both feet. Opi and I are guitar players and click well together. Robbie pulls his weight." I sense a hint of an inside joke where I imagine pulling weight to have something to do with coffins or body bags, but having interviewed the band over a year ago with a different line-up, I was afraid to press the issue and just dug up what I could on Robbie Graves. 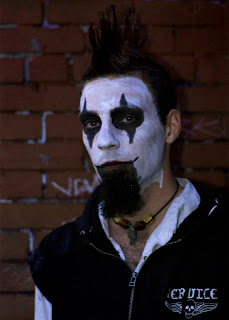 "Well, I was brought up in a little town not too far from here. After high school I followed my family lineage and became a grave digger. One day, I was walking along and a hand reached out from an open grave and pulled me right down. I stayed down there for a while. They respected me since, you know, I was the one that put them down there! They all new my name."

Now, I was not clear on how dead he actually was. See, I am not that clear on how dead any of them actually are as Opi is simply possessed, and former band members just sort of disappear after contracting the mysterious plague. Or do Patron Saint of Plagues members die twice? So I asked, and got a typically loud sarcastic answer punctuated with a curse which led me to trust he is likely the most dead of all.

"I spent years down there, entertaining them, played some music for them, you know, and they loved it. They thought I should bring the sound of the dead up to the world of the living so I came back up and started playing bass." 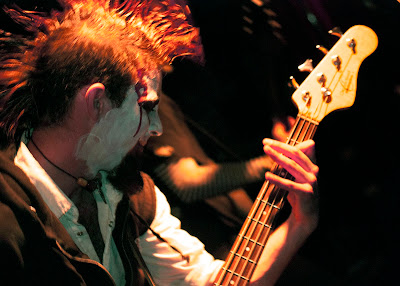 He learned a lot underground as his body decayed and his dead soul grew. "I try to just bring the stories of the people in the land of the dead - the murdered and diseased - and remind people what they are going to end up as."

Robbie traded his cemetery shovel for a Washburn Oscar Schmidt  bass and has been playing for 7 years, self taught, with no formal lessons. Metal was his genre of choice and still is, so that is where he started then progressed  naturally to punk. After seeing Patron Saint of Plagues play several times, he looks forward now to growing as a musician instead of growing funeral flowers on fresh grave dirt.

"Really, I just started, so I try to progress and keep up with them." He describes being in the band as, "straight up amazing. They are amazing. Not sure how I am going to last two weeks with these fuckers [on tour], but I do have a lot of patience. A LOT of patience." Patience was one thing he learned as he transformed from young grave-digger to the corpse staggering before us today.

So, horror. Its a horror punk band. The blood, the ghosts, the morbid nature; being dead and having grown up in a family of grave diggers he does not continuously steep himself in the dark and dying as one may think."I like underground punk films... I am more into political satire, anything anti-goverment or anti-authority. books, movies about taking it all down."

The style of the band has shifted slightly, "I don't have as much spirit as Deadboy," said Graves. "I never said it was a GOOD spirit. Things have become faster than the bass I played when I was alive. A lot harder, faster, more gruesome."

This new addition could not have come at a better time. All winter, the ground would have been frozen solid, making it impossible to find a suitable musician. So far there are weekend dates for PSOP in Montreal June 16th and 17th, The Bovine Sex Club June 24, Kingston on the 27th, then to Cochrane for the Touch of Death Metal and Punk Festival. In July, they will be in Oshawa Friday July 13 for the Pabst Blue Ribbon sponsored Horror Punk vs. Psychobilly show. In August, they will return to Oshawa during a two week tour hitting southern cities then dates in Quebec and Halifax.

Get more off the PSOP facebook page, keep track at Reverbnation, or get it all at patronsaintofplagues.com.