Troma Fans Thrilled at the Mayfair

Posted by typicallydia on June 16, 2012
Father's Day Round One. Ding Ding Ding! This film was so much fun and full of everything I personally adore in cheesy horror, that I am certainly attending the Sunday screening as well. Gotta hand it to the guys at Astron-6 - they know how to deliver a grindhouse, late-night throwback feel like nobody else.

All in all, I had an awesome time and so did all on their way out of the theatre. As much as I anticipated a walkout in the first ten minutes (A Serbian Film had walkouts with similar subject matter) everyone stayed put.

If you missed it, no problem, come Sunday. There will be a few Ottawa Horror prizes but you did miss out on the Fangoria goodies. Pre-issues of the upcoming edition and rare back-catalogue were up for grabs and as luck would have it, some huge fans won big.

These guys were not your regular Troma fans. They were extras in the Ottawa-made exploit-action flick Harry Knuckles and the Pearl Necklace, which features Lloyd Kaufman himself. Of course they loved the film, and had all the trivia answers for sure. Awesome guys! 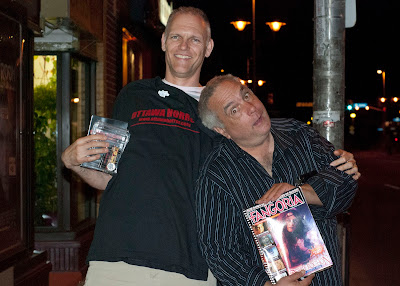 Also in attendance was OH pal, Splatterpictures. Since this post would be six pages long with a review, we invite you to head over to his Ottawa-based and cancon-centric site for this review. I am a huge fan of Wes' insight and style. Those who regualrly read horrormovies.ca may know him well...

"Fathers day is like watching a hyperactive child hopped up on pixie sticks tell you about their day. It’s fast and chaotic at times. Characters spew out their dialogue and then random stuff happens. It took me the first 20 minutes or so to get used to the pace but once I allowed myself to bow to the absurd I started liking it more and more."

I must say, I enjoyed the pace. From the word go to credit roll, I was enthralled. With a few smash-cuts from laughs to visceral gore, my attention deficit nature was appeased. Not a fan of comedy, personally, I found the camp was held to a dull roar making it exceptionally subversive. Read: Perfection. I thought it was perfect. A great introduction to Troma for the virginal, and a great treat for Dad if he is into cannibal torture rape gore.