My fascination with horror movies started at a very young age. I used to test my nerves by wandering into the “Horror” section of my local video store and gaze upon the gruesome and bizarre video covers that crowded the shelves. Despite having neither the guts nor willingness to watch these spooky flicks until I was slightly older, I would dare myself to look at the horrifying images adorning their video-cassette cases and if I were feeling particularly brave, I would read the plot synopses provided on the back. Eventually, I was old enough to watch such horrific fare and I was often disappointed to find that the actual films were not nearly as frightening as the horror I had envisioned upon seeing their posters. So, below I offer my list of the top five horror movies that had me shaking in my boots but were not nearly as scary as their posters… 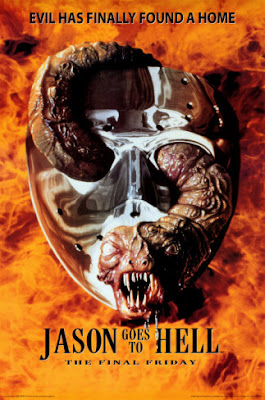 Why the poster was scary: The fiery pits of Hell burning away in the background while a demonic snake-like monster penetrates the orifices of Jason’s trademark hockey mask… This poster actually hung  at my local video store for years after the film’s release- directly above the Video Return Drop Box. My mother would send me to return videos and I would stand, motionless, staring down the dreaded poster before depositing the films and fleeing in fright.

Why the film was not: Jason is killed. But his heart lives… and you too could be possessed by his murderous spirit. It claims to be the final Friday the 13th film, but it fails to make good on this promise. In fact, it just fails to make good in general.

What was scary: It took a decade for the Freddy Krueger versus Jason Voorhees mash-up alluded to in the final scene. 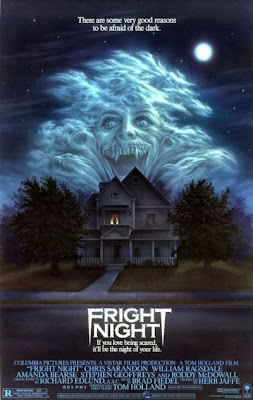 2)      Fright Night (1985)
Why the poster was scary: That demonic face. Those evil clouds. That spooky house… How could this movie be anything but terrifying?

Why the film was not: I actually avoided this film for years, certain I was not yet capable of visually witnessing the horror depicted therein. However, I came across a plot description of Fright Night and there it was: “vampires”. No possessed demons. No malevolent spirits. No evil dead returning from the grave to steal the young souls of the living… They were bloodsuckers. Vampires, especially in recent years, rarely make my “most feared monsters” list. So, I sat down and watched the movie whose poster inspired many a terror-filled night. Much to my chagrin- it was funny! It wasn’t terrifying; it was comical and downright silly. I was in shock. All that fear for nothing. *sigh* 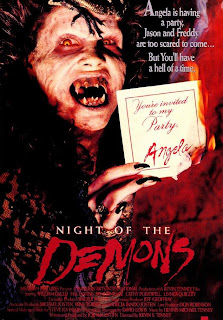 Why the poster was scary: The demoness gracing the front cover of this film was horrific enough to scare the pants off even those with industrial strength suspenders.

Why the film was not: Bad 1980s clothes, hair and special effects make this film a campy classic. At least there is a lovely Bauhaus song on the soundtrack.


What was scary: The only thing scarier than the poster was the acting. 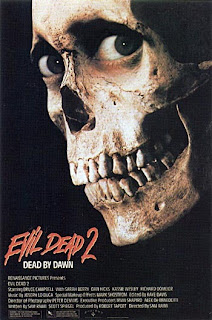 Why the poster was scary: A skeleton with eyeballs? The illogical nature of this poster is scary enough but I was certain that were would be undead, evil skeletons in this film and how do you kill a skeleton? They are already dead!!

Why the film was not: Despite a significantly larger budget than it predecessor Evil Dead (1981), Evil Dead II veered on the comical side, in essence turning Ash (Bruce Campbell) into a strange anti-hero who battles his own, inner darkness. Too many laugh-out-loud moments in this film detract from any possible horror it could have conveyed.

What was scary: The laughing moose head. I still harbour an irrational fear of taxidermy. 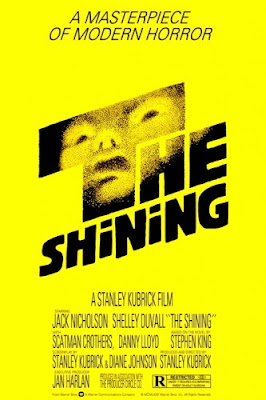 
Why the poster was scary: That freaky, alien-looking head with the crazy eyes and gaping, soul-swallowing mouth. What is that? I still to this day do not know. Some people have told me they think it is Danny (Danny Lloyd). Others say it is a random ghost. Regardless, that thing is terrifying.

Why the film was not: Okay. Scratch that. The Shining is most definitely scary. However, it’s a slow-burn brand of scary, which in my opinion, can be far more effective. Regardless, I spent the entire film waiting for that damn alien-baby head to show up. And it never does! What is it? Gah!

What was scary: To me, the most frightening part of The Shining is when Wendy (Shelley Duvall) begins to see all the spirits in the hotel and walks in on an intimate moment between a man in a dog costume and another man in a tuxedo. Well, that and the blood elevator.

There you have it! Five horror movies whose posters were scarier than their actual content! Stay tuned, as I could easily write a follow-up about My Top Five Least-Frightening Posters for Absolutely Terrifying Films!

typicallydia said…
you know, one of our contributors, Stephanie Bauder (a.k.a. Vodka Diet Coke) was in Night of the Demons III. I wonder if she found this first one scary at all?
August 28, 2012 at 1:20 AM