New Horror 'The Three' to film in Diefenbunker - Casting Call

Posted by typicallydia on September 08, 2012
Scott Goldberg Productions want you to help fund dark cinema. From the official press release, "The Three is a story about a group of scientists who are creating a scientific project in memory of their son who had died in the war. The death of their son fuels their desire to create a solution to end all of the wars for good. The story then delves deeper into a dark and disturbing setting where the horrors of the past are showcased throughout the film". 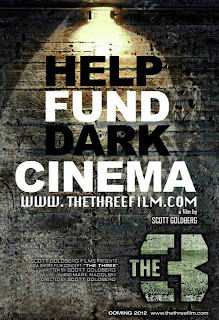 I am ridiculously pleased to see filming for The Three take place in the Diefenbunker, as those who know my previous work experience with the Dionne Quints Museum, I love to see this slightly twisted use of our Canadian historical sites.


They will begin shooting in mid-2013 and in the meantime, the filmmaker will be visiting the area. In fact, he is here right now and published this recent casting call:

LEAD ROLE IN THE THREE: CASTING IDENTICAL-TWIN ACTORS FROM THE CARP OR OTTAWA AREA. The role is that of Jake Fisher, a son of two scientists who lose him in the war and end up building human replicas in memory of him. Casting identical twins specifically for the replica scenes in mind to sell the illusion that there are more than one. Send me a message if interested or send e-mail to info@ thethreefilm.com

Nothing creepier than twins in a claustrophobic setting, agree? Their mind is certainly in the right place, with the goal to create a new horror without exploiting old methods. What we will get from this team is anything but cookie-cutter scares.

If you are interested in funding this project, or offering your skills, check out thethreefilm.com to get a feel for what they are aiming for. We will be following this project in development and look forward to hearing more as the filming dates draw nearer.