“I’m a super-hero,” Sophia exclaims, “and so is my mom. And my cat, he’s a super-hero, too.” It was a warm summer day when I was welcomed into Dr. Aalya Ahmad’s home for an interview. Despite the humidity outside, Dr. Ahmad’s beautiful, spacious home remained cool and comfortable, both in atmosphere and aesthetic. The gorgeous, two-storey house caters to flights of intellect and imagination- a double bass stands in the living room corner, awaiting a skilled hand. A drum-kit stands nearby, but it won’t have to wait long before Aalya’s enthusiastic four year-old, Sophia begins to drum away. Amidst artwork adorning the walls and lush and leafy plants stretching for the sunlight beaming through the stained-glass windows, three cats wander the rooms- bouncing up the wooden stairs, dozing on the velvet furniture and watching birds flutter about the lovely garden. The house has a surreal, timeless quality- both intoxicating and invigorating- and I am instantly reminded of my first day in Aalya’s class. 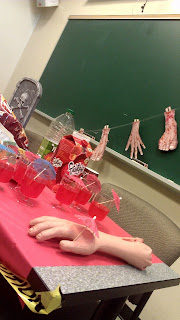 Let’s back up- two months prior, I was approached by our very own Lydia Peever with a unique opportunity. Apparently, there was a summer course offered at Carleton University which centred on horror, entitled The Monstrous Feminist: Gender and the Horrific in Popular Culture. Ottawa Horror was contacted and offered the chance to audit the course. Given the nature of my academic research (gender and horror), I jumped at the prospect of seeing such an intriguing class in action. Arriving on my first day, I was excited to meet the woman who had single-handedly developed this unique course. Of course, expectations abounded- I imagined a deadly serious and intimidating professor marching to the front of the class with the ability to turn horror into something densely theoretical and tediously boring. I was entirely incorrect.

Dr. Ahmad strode confidently to the front of the room, beaming a smile of pure warmth. Still slightly intimidated, I introduced myself and Aalya seemed genuinely pleased to meet me. Instantly, I felt like a welcome addition to the class. Aalya wasted no time sinking her teeth into the material of the week. And the students hung on her every word as she effortlessly merged text and theory into something tangible. The students were abundantly enthusiastic, eager to discuss their comprehension of the course material and relate it to previous readings and their personal experiences. It was quite evident that this was going to be a lively and gregarious class.

Over a lunch of fresh vegetables picked from her garden, Aalya told me how this course was her own creation, inspired by her experience with and love of the horror genre. However, she is clear to point out a distinction between fandom and academic inquiry- that is, a true study of horror must be ground in critical, theoretical discourse. Aalya isn’t merely a fan, she is an expert. Not only is she a professor at Carleton University, she is a regular conference panelist and speaker, co-editor of horror anthology Postscripts to Darkness II, a human rights activist and she was recently interviewed on CBC Radio. Despite all this recognition and celebrity, Aalya is a humble and honest individual, with an authentic desire to educate and support others.

While Aalya and I are deep in discussion about academia and the changing state of education, Sophia has been mostly successful in containing her boundless energy and excitement. However, after nibbling on her lunch, Sophia is eager once again to continue with my tour of her home and her existence. I am introduced to one of her three cats, aptly named “Supers” (as you may recall, he is a super-hero). Sophia decides to show off her super-speed and begins running from one end of the house to the other. I cannot help but smile when I notice that Sophia is wearing princess pajamas adorned with a Velcro-on super-hero cape, which floats out majestically behind her as she runs from one room to another. It is very clear that not only does Aalya support and encourage others, she insists they be given an opportunity to express themselves and their creativity.

Aalya lovingly brings out a file full of paperwork from the Monstrous Feminist course from years past. Inside lay papers and assignments- a make-shift scrapbook of student accomplishments and achievements. She shows me a comical horror flow chart, on how to survive a horror film, followed by a large, colourful poster and a collection of graphically stunning hand-outs. You see, the students in the Monstrous Feminist course are anything but passive. Each student is put into a group and they are required to present with their group on a topic from the course. The assignment dictates that they must deal with the material from their chosen week and present the accompanying film, with marks assigned for creativity. However, the rest is left up to the students. And they took this freedom and ran with it!

During the week in which we screened The Brood, the students prepared Ginger-Brood cookies, decorated to match the costumes from the film. They also made children-shaped booklets to hand out, with the key features of the film and reading detailed within. For the week about Ginger Snaps, the students made “blood” beverages and taped “bloody” tampons to the walls, desks and chalk-board. For Tokyo Gore Police, the group, entirely in authentic costumes, served sushi and held a content contest to win a hand-painted Japanese parasol. However, the pièce -de-résistance was the week of Dawn of the Dead when only one group member arrived to class and feigned concern for his missing comrades. Moments later, the rest of the group invaded the classroom, embellished with fake blood and festering wounds. The zombie students then attacked and ripped apart their fellow, human group member prior to beginning their presentation. Though it was not a requirement, the students prepared some kind of edible monstrosities to enjoy during the screening each week and the classroom was suitably decorated for each film’s theme.

During the bloody feasts, I captured the occasional picture to show to my friends. Everyone responded in the same way; “what is this class” and “how do I register”? Aalya tells me how each semester the course transforms; different personalities make for different manifestations of the course and each cohort of students is entirely different from the last. One thing that is consistent is the imaginative and enthusiastic response from the students. In most of my academic experience, the students quickly and quietly file out following the end of the film screening. Not in Aalya’s class. The students ritualistically line up at the front of the class, patiently awaiting their turn to speak one-on-one with Aalya about everything from the class assignments, to their favourite film, to a new literary discovery they have made and Aalya’s effusive and interested response is always worth waiting in line.

It is nearing dinner-time when I begin to pack up my belongings and Aalya insists I take the left-overs from our delicious lunch and a cutting from one of her beautiful ivy plants. I feel slightly hesitant to leave this surreal house with all of its picturesque charm. Indeed, the final Monstrous Feminist class played out in the same way. It was a bitter-sweet end, the students were resistant to let go of this amazing experience and heart-felt goodbyes were exchanged as though everyone had become fast friends, comrades in this enigmatic experience. Aalya tells students to stay in contact and I am certain that many of them will. It is the unique charisma of Aalya Ahmad, the ability to enchant and inspire that is her super-power. As I’m leaving Casa Ahmad (shared with beloved partner Dietrich- a partner in every sense of the word), I notice Sophia’s drawings line the fridge and I see one of herself, her mother and her friend, all in matching super-hero capes. It is common for children to think that their parents are super-heroes. But in Sophia’s case, she just may be right.