A recent interview begins, "My name is Mandy DeGeit, and I have a vagina," which is to say, she does not necessarily identify herself as a 'Woman In Horror' which has become a trend. Perhaps you could call her out with the seemingly feminist subject-matter of 'She Makes Me Smile' and 'This Only Happens In the Movies' which certainly feature powerful and horrific women. Or, her upcoming offering in Fifty Secret Tales of The Whispering Gash: A Queefrotica, a non-horror anthology where proceeds are supporting breast cancer research. Even her most recently published piece 'Dead Things Don't Rise' in the buzz-worthy 50 Shades of Decay, may seem like sick-chick-lit, but no. She just writes, and this is what comes out.

Raised in Northern Ontario, Timmins exactly, her parents didn't like her watching horror movies. Reading seemed to slip under their radar. "I'd go to the library," she said, "where I was like, oh, Stephen King! Dean Koontz and John Saul! But yeah, I've been a horror fan all my life. I watch horror movies alone though, I don't get a bunch of people together and watch a movie. I like obscure, gory, scary... if it's creepy and it looks like I'm going to piss myself watching it, that is what I want."

Her current reading list is a who's who of the new splatter-punks. The grisly and violent horror of James Wrath White, Jack Ketchum and Edward Lee top the pop charts but she maintains, "I like to read people that I have met. I spent a fortune at KillerCon picking up Mercedes M. Yeardly, Damien Walters Grintalis, James Roy Daley, Kelli Owen, Robert Ford; I like to read people who are supporting our craft and that I've drank with. Anyone that I have met at a convention, I've probably bought one of their books, Tim Lebbon, Richard Wright, T.G. Arsenault; I could go on!" And we did. For an hour we talked shop, peppered by standard interview questions. One author she is enjoying the hell out of is Jesus F. Gonzalez who fits into the White/Keene/Lee faction of over-the-top and visceral horror. Their names came up a lot as we delved into writing, her history, and our mutual favorites.

Mandy began writing short fiction after attending a convention and sitting in on a reading. Though she had been writing for most of her life in the form of journals, and she didn't really plan to get into this, she began writing spur of the moment. When asked about future plans, there are none, save the casually mentioned novel that is in the works and that she does write regularly. Considering that the last year has been very successful--being published for in a handful of well received anthologies--It was her first published piece that catapulted her onto the killing floor that is writing horror fiction.

you can see the full list on her site's bibliography.

This was when I heard about Mandy. Just over a year ago. There was some excitement, to say the least. News hit that a young author's work had been edited right into the dirt, then published with typos and various changes that were not only unethical, but outright wrong.

"If it wasn't for Kelli Owen and Brian Keene that told me to step up and write a blog, I wouldn't have," said DeGeit, "I would have been like anyone else and think I don't want to ruin my name or be blacklisted." She Makes Me Smile was to be her first published piece after two flash pieces accepted by the now-defunct Pill Hill Press never came to pass. Sadly, the title itself was misspelled in Cavalcade of Terror from the similarly dead, Undead Press.

Editors do not normally malign an authors work. Authors, normally, do not criticize editors... well, they do, but not publicly... and not without damn good reason, it IS career suicide. In this case, it was a public service. Her work had been altered so terribly, it wasn't even hers anymore. The story had suffered and her name may have suffered far more than the risk that her initial blog post would have come across as vindictive  Of course, the horror world, and writing world understood and the support and sharing of her situation took her by surprise.

Gory details and utter heartbreak can be found in her initial blog post. Vincenzo Bilof, who was an editor at Undead Press at the time, took the brunt of criticism though many in the horror and writing world had the publisher, Anthony Giangregio on the "Beware And Avoid" radar since 2006.

Now, a year later, she and her past editor get along well. "I'm reviewing his [Vincenzo's] book right now, so we have become good online friends, and definitely worked through the bull that was 'She Make's Me Smile'" To hear her say it aloud diffuses some of the tension. She pronounces it "Make-Is-Me-Smile" with a grin. She sums up by saying that they both got wrapped up with a terrible publisher, and that people make mistakes and move on.  To continue the public service aspect, when Giangregio's name floats up in the fount of a submission call, she and many other authors and publishers sound the alarm and try to warn new authors away.

In the weeks following the Undead Press problem, that I lovingly refer to as DeGeitGate, thousands of people came forward with their stories. Authors rallied in support. Forums were aflame and several interviews came alight in the comment sections as the story unfolded. Neil Gaiman linked to her original post on twitter. Novelist Jonathan Maberry voiced his support on Facebook. Things are much quieter now, in comparison. Lately, she lent her voice to Kettle Whistle Radio, a horror podcast. The episode, Too Early For Whisky, offers 'Things to Avoid in 2013' among horror talk and music. Kettle Whistle Radio and The Wicked Library are part of the Society 13 podcast network where DeGeit's voice may revisit in the future.


Although she travels to conventions and finds most of her network of horror authors in the United States, she treats Ottawa as a home base and has since 2008 "I have a big circle of friends here... I wish there were more culture. Maybe I talk to the wrong people. There are not enough readings, not enough conventions. I thought of moving to Toronto for a bit, but no, I'm going to stay here for a while."

"Horror is more prolific in the States, as a genre. More conventions yeah, but there are get-togethers, one day events, book fairs... more authors meet up, share space and sell their wares." [author's note: this is changing, and was something we chatted about... future plans...stay tuned]


Meet Mandy and pick up a copy of her two fan favorites, She Makes Me Smile and This Only Happens In The Movies at Ottawa ComicCon. She will be haunting the Ottawa Horror booth for a bit on Saturday, May 12. More information on that will be posted the day of on twitter and facebook.

In the meantime, visit her blog where you can get signed copies of her work, or her Amazon author page. 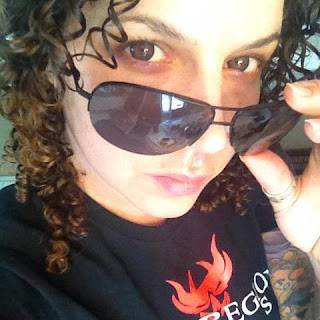