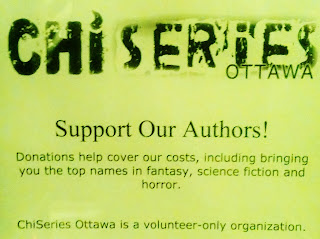 The wind was far less scary than some of the things going on indoors last night. Editors Sean Moreland and Aalya Ahmad took over the event space at Collected works, with many of the contributors to the Postscripts to Darkness anthologies. You may recall the launch party and our review this past summer. Now, they are seeking submissions  for volume four. In between authors reading, Sean tossed out some rather tough horror trivia. My favorite angle to this was 'Horror Haiku' where after the few lines crafted of scary movie plots, the audience had to guess what film it was. And although she didn't enter into the costume contest, what Ahmad wore was not only a conversation piece but a full-on conversation stopper . Aalya's baby was certainly kicking Sean introduces the next author trivia prizes come colour coordinated now  Any Jane and Lawrence, dapper and flapper Amy's nails, detail... spooky divine! Amal el-Mohtar, author of The Ho