Posted by typicallydia on April 22, 2013
Check out that Ottawa Comiccon poster! As a one-time TNG fan and a The Guild watcher, I was sold in a second. The moment they announced who designed it, I wanted to snag a chat with the artist since he's been on the Ottawa Horror radar since last time we saw him here.

You may have met illustrator Mike Rooth at Ottawa Comiccon 2012. He spends a lot of time in the area, and raves about the con last year "Ottawa was awesome," and he assures me it's not just because we are both Ottawa people that he says this, "I've never had such a great response to my work." The fan interaction, sales, and entire attitude of Ottawa Comiccon 2012 was just amazing, he said.

Comiccon organizers contacted asked him in January to create the 2013 poster which fans appeared to fall in love with instantly. They left the initial concept up to him entirely. This led to a dynamic back and forth online during its creation including a change of characters pictured in the Batmobile. The other character looming in the background is the most mysterious entity in Ottawa - the Parliament buildings. "I've had to draw the Parliament buildings about seven-hundred times in my career," and can never re-use them despite them looking pretty much the same for nearly 150 years.Different angles, different lighting, different clients... "I love that ornate stuff, but I just don't have a hand for city-scapes and architecture."  The only other things he is loathe to draw (and has ended up drawing a lot) are horses. "I can break down a figure, I can break down perspective, or a tank or gun, but I just cannot wrap my head around the alien proportions of a horse!" Though, he has drawn horses as often as the Centre Block. Hundreds upon hundreds of horses along with hundreds of versions of The Hill for historic and educational graphic novels. 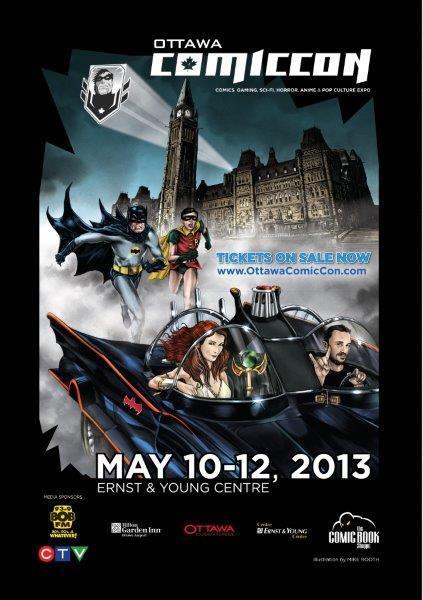 After working with Scholastic and accruing six years of educational illustration, he did about 50 graphic novels in that time. "A lot of Wild West stories, or how Johnny got a new pair of skates, a lot of Canadiana." Suddenly that job was done, so it has been a three year period of going back to his roots. No more digital, he draws by hand once again.

Trained taking three years of Illustration at Sheridan College, graduating in 1999. "I really wanted to go college just to see if I had any talent. I was lucky enough my whole life to have people tell me I was good at what I was doing and that I should keep going... right after school I had a tiny piece published and it was like a shot of snake venom and I needed to get more into my veins." He continued to work in a factory and take small and volunteer illustration contracts until one day the machines themselves pushed him embrace illustration as a career. A near accident could have cost him both of his hands at one point. "They would have been smashed to strawberry jam. I just stood there, the sound of that metal plank smashing against the steel floor was like this giant bell. I stood there with my hands just shaking and thinking 'You know what? If you ever needed a sign that you are not doing what you are meant to be doing, take this as a sign." He quit that job on the spot, went home and decided he would be an illustrator or starve to death. "I just hit it as hard as I can. One contact turned into two. Two jobs turned into four, and it just snowballed from there."

"When I had my first Marvel license contract to draw an advertisement featuring Spiderman playing pool against the Green Goblin, I was paid what felt like an obscene amount of money," then he relates five years of no job that could really compare. "A good year, a bad year, a really good year, a really bad year...," the ebb and flow story of freelance and contract art that many creatives can relate to.

Recently, like most artists, he does hold a second job maintaining a couple of properties that secure a portion of his income, he finds his time spend drawing is far more focused. Less revisions are needed and concepts are clearer between his imagination and paper. Even though his other job tends to be a source of interruptions showing apartments of rescuing adventurous Transformer action figures from plumbing follies. "I feel like it makes it [drawing] more special. More of a sacred time. Ritualistic. I sit at this ancient desk and I flick this light on and it's 'everyone, just please leave me alone.'" He also works at a comic book shop, Comic Connection in Oakville which also fuels his creative time and helps even his annual income. "The pressure is gone. For fifteen years there'd be months where I didn't get a single paycheque for three and four months at a time."

He has also taught others how to draw. In 2002, the Oakville Art Society contacted him to act as cartooning instructor. Soon, one class turned into two and three classes a day and summer camps. From people in their 20s to those in their 80s he had a really popular run of classes seeing repeat students who just liked his class that much.

From his first days in a elementary school classroom drawing werewolves and monsters, and learning how to pen more intricate figures, he still delves into the macabre and grotesque. Fan commissions and sketch cards involve the popular Walking Dead characters as well as Shaun of the Dead mash-ups. There is a grim and fantastic horror project that is in distribution limbo with three pages left to ink. He does hope that particular project sees the light of day since he had brought some very innocent things to terribly dark places and plainly loved the story. He would like to draw Viking-infused horror if he had the choice, based perhaps on his own alter-ego and bygone days of Dungeons and Dragons.
There is a project continuously on the back-burner, let alone collaborative projects that simmer on many distant hot-plates. Being able to blend Norse mythos, science fiction and horror may seem rough-edged to some but I'd have to say that Mike Rooth is anything but 'Uncouth'. But hey, he sure can bring it there on paper. Check out his gallery at mikerooth.com or folow his twitter @uncouthRooth ~