Six of the Creepiest Kids in Horror

Flashes of lightning from the storm outside light up the old house, turning the decrepit furniture into shapes and shadows in the corners of the room. The smell of rotting wood and drying blood is dizzying and suffocating as panic cuts your breath short. Faint fluttering approaches, closing in, getting nearer and nearer. Until you see it- it’s…. it’s… a toddler! Nothing is quite as frightening as children. Their tiny hands, their obscenely large heads, their ability to repeat you verbatim at the exact worst possible times. The horror genre has capitalized on the inherent creepiness of children- demonic babies and robotic killer kids populate many a horror film succeeding in cementing this monster’s fear of pacifiers and bassinettes.
In celebration of Ottawa Horror’s presentation of Roman Polanski’s Rosemary’s Baby at the Mayfair Theatre, it is now time to revisit some of the creepiest kids in horror and some truly ghoulish honourable mentions. 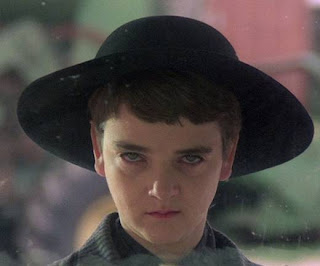 6. Isaac Chroner
The Children of the Corn (1984)
In the cheery little town of Gatlin, something strange has been happening with the children. After murdering all the adults of Gatlin, they formed a kids-only cult to worship their new God, “He who walks behind the rows” and finally give cornstalks the much-needed worship they deserve! When Burt and Vicky (decidedly grown-up, and therefore the enemy) happen upon the deserted town, they are terrorized and held prisoner by the frightful youngsters. Leading this band of merry, mini-murderers is  the charismatic and evidently very persuasive Isaac Chroner.
Creepy Criteria:
Isaac has that whole “bad boy” thing down with his stylish hat, wicked death-glare and deceptively-mature haircut. His sociopathic lack of empathy or emotion is icky enough, but when he sentences his own best friend/servant to death, we start to see why his parents gave up on disciplining him. 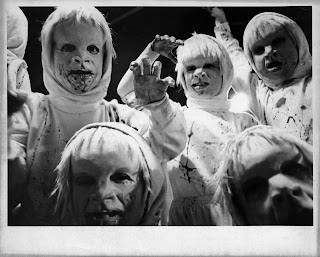 The Brood (1979)
Ever been so angry you could kill someone? Well, don’t, because that’s illegal. And now, for a limited time only, you can admit yourself into Dr. Hal Raglan’s care and he will see to it that the killing is carried out for you! Nola Carveth has some serious anger issues to sort out and Dr. Hal’s therapy seems to be working because all of the stresses in Nola’s life keep mysteriously disappearing. Or getting bludgeoned to death. Same diff. When the police finally catch one of the little creatures responsible, they find out that hatred can be a very dangerous emotion.

Creepy Criteria:
Nola’s children, the brood, are not actually children. They are physical manifestations of emotions designed to serve only one purpose. They have no navels, no genitals, no teeth and very short life expectancies (who would want to live without genitals, anyway?). When you finally catch a glimpse of this unattractive brat pack, they are a truly a sight to see- for me, it always harkens back to the last moments of Don’t Look Now (1973). This ghoulish gang is enough to make you give up teaching pre-school. 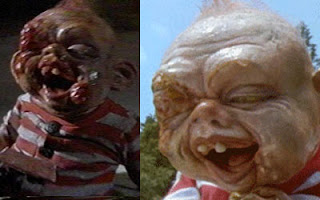 Braindead (aka Dead Alive) 1992
Peter Jackson’s delightfully demented film finds Lionel Cosgrove, a sweet-natured young man, living in Wellington, the capital city of New Zealand and caring for his elderly, domineering mother. Lionel is too busy falling in love with the sexy señorita, Paquita to notice that his mother’s mysterious rat-monkey bite is infected and causing some strange symptoms. Like festering wounds and an appetite for flesh. Lionel does his best to care for the rotting corpse his mother, who infects several others. When two of these freshly made zombies start feeling amorous, even Lionel can’t stop their love. And if two decaying bodies making sweet, sweet love isn’t enough for you- they are delighted to find they have conceived a love child/abomination of nature.

Creepy Criteria:
Where to start? He is the product of a zombie union, which biologically raises all kinds of questions. He has a great sense of humour and spends most of his onscreen (and off-screen) time laughing away to himself. When Lionel decides to take him for a walk, Selwyn proves that as an infant he is already smarter than the bumbling, awkward Lionel (which may or may not be an actual feat…). He is also quite adventuresome and athletic, showing up in the strangest of places, and surprisingly fast for his age. 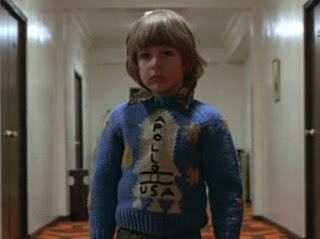 Danny is just your typical kid, he likes long trike-rides through hotel hallways, playing with the twins who live nearby and hanging out with his dad, Jack Torrence, friendly care-taker at the picturesque Overlook Hotel. Like many kids, Danny has an imaginary friend who tells him things and lives in his mouth. Danny also sees things other people don’t see and talks without moving his lips. Okay… wait… maybe there is something weird about this kid after all… 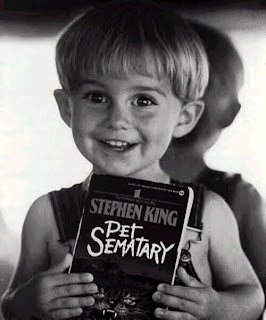 2. Gage Creed
Pet Semetary (1989)
Rachel and Louis move their family and their cat, Church to the sleepy town of Ludlow and live between the dangerous highway and the even-more dangerous Pet Semetary. After Church the cat meets an untimely end at the wheels of the busy motorway, Louis buries the cat at the Pet Semetary only to find the cat alive and well that night. Well, evil and undead, but cats are pretty evil to begin with so it was kinda hard to tell. When Gabe meets the same fate as Church, Louis buries Gage in the Pet Semetary instead of considering relocating to a less demonic and dangerous spot of land. Gage returns home and starts killing. Louis still doesn’t learn his lesson and later, tries the same reanimation process with his wife Rachel.

Creepy Criteria:
Those blond locks. That dimpled smile. Those big bright eyes. Evil never looked so innocent. Seriously, you named your kid Gage Creed? You were just asking for him to turn evil. And let’s not forget his creepy tagline, “Come play with me, Daddy!” 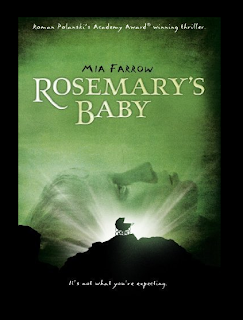 1. Rosemary’s Baby
Rosemary’s Baby (1968)
Guy and Rosemary are delighted to find that Rosemary is expecting a little bundle of joy. In fact, the whole damn street seems excited for Rosemary. Suddenly, people Rosemary doesn’t know are getting intimately involved in the pregnancy. Rosemary finds all this care and devotion a little unnerving… Almost as unnerving as the strange pains coming from her stomach. And the demonic rape dreams she has had. And the ritual druggings administered by her neighbours… Perhaps they are expecting more than a happy, healthy boy…

Creepy Criteria:
The baby in Rosemary’s Baby is not really a character until the end of the film. This slow-burn horror is about creating a creepy atmosphere as Rosemary slowly becomes cognizant of the fact she is carrying the spawn of Satan.  I’ve heard first pregnancies are always the hardest.

Honourable Mentions
For one reason or another, these fellas and little ladies just didn’t make the cut. Well, some of them made cuts but not here. Not now.

Reagan from The Exorcist (1973)
When I told people I was writing this list, everyone said “Rags! Rags!” But here’s my thing- when all this demon-possession business goes down, she is starting puberty! That qualifies her as an adolescent and thereby disqualifies her as a “creepy kid”, in my opinion. Yes, even despite the infantile nightgown, incessant giggling and public urination. Next! 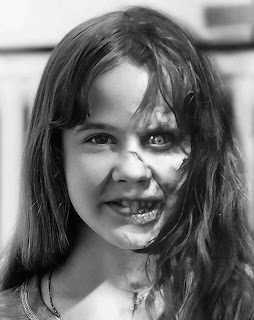 Esther from The Orphan (2009)
Again, not a kid. Just looks like one. Which is all kinds of creepy. But still. Doesn’t count.

Toshio Saeki from Ju-On (2002)
Ghost-cat-boy from Ju-On/The Grudge was pretty creepy. And pitiful. What do you call it when you’re scared of something and you pity it? Pitifear? Pitifraid? Yeah, I am pitifraid of that kid!

Damien from The Omen (1976)
Damien is the Anti-Christ. People kill themselves and others for him. That’s creepy. The kid himself? Meh. Not the scariest. He’s no Gage Creed.

Starving Piranha said…
Glad to see Gage made the list - he was definitely my first thought when I saw the topic, and I thought he might end up overlooked for some reason.
April 18, 2013 at 4:18 PM