Posted by typicallydia on August 22, 2013
At the last Postscripts to Darkness event, I had a chance to hear one of my favorite short stories of the year read aloud by its author. I knew the story, and was aware of the writer, but was doubly impressed when this friendly blonde let her strong voice pour out. Her characters and settings are delivered by the words she chooses so carefully. Without bravado, you are transported to a dark smoky bar, perhaps on the edge of the universe, where crustaceans glisten under strobe lights. They make music to mesmerize their human worshipers, and may take you into the fold.

Read: 'A Pair of Ragged Claws' from the April 2013 issue of Black Treacle. 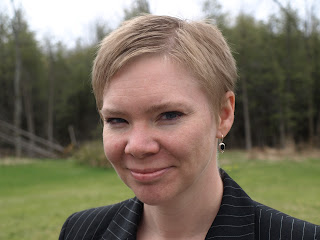 You may recognize Kate Heartfield from events at Ottawa's Writers Festival, but she is most recognized for her work in non-fiction. By day, she sits on the editorial board for our nations paper of record, The Ottawa Citizen. By night, she does most of her writing, crafting historical or dark speculative fiction tales from her countryside home.

Hard fact and opinion was not her first tango with ink and paper. "I've written fiction for as long as I can remember." said Heartfield, "I began a secondary-world fantasy novel on my Dad's Osborne computer sometime in the 80s, when I was about 10 years old, and I think I wrote stories earlier than that."

Through high school she flirted with poetry, as many teens and authors do, but those pages are basically lost and forgotten. Before the start of her post secondary education, and shelving her first unpublished novel, she settled into university life to study Political Science. This was a step on her path to becoming a lawyer, that soon changed to journalism.

After school she began work, then took a course in 2007 through the Humber School for Writers where she submitted a novel in progress, piece by piece, to her then-mentor Paul Quarrington. Another novel written, yet put on the shelf with the other for the time being.

"For a long time, I ignored the advice that Ray Bradbury and others have given: new writers should write short fiction. I wanted to write novels. I would insist to anyone who asked that novels and short stories were completely different forms. I liked short stories; I just didn't think it was my forte." As with any venture, there was a learning curve and it took time for her to settle into the practice of writing that was not only comfortable but produced work she was content with.

"I vowed to set my ego aside and start really learning how to tell stories. I took every workshop I could, including a few in Ottawa. I took online courses. I read how-to-write books; I listened to podcasts. I joined every online and in-person critique group I could. I critiqued other writers' work. I got more involved in fandom and started going to conventions. I took about a year off from novels to focus only on short fiction, for a couple of reasons. If a story isn't working, it's a lot easier to trash 4,000 words than 80,000... You can do something really odd or surreal in a short story that wouldn't sustain a reader's interest for a full novel."

"After that year, when I started breaking through in short fiction and make some sales to prominent markets, I took another stab at a novel. And this time, it works... I feel like I've got a better handle on the rules now, so I can break them better."

Over the last year she has enjoyed new success in publishing. From Black Treacle in the spring, to the recent sell on Daily Science Fiction, she also has a story in the Ottawa-based anthology Postscripts to Darkness 4 due out in October 2013. Although she deals with a byline spotlight regularly with her articles appearing in Postmedia newspapers and online across the continent, the open attention to her fiction was daunting at first. Having that first vague review or comment on a story was thrilling in a familiar though new way. 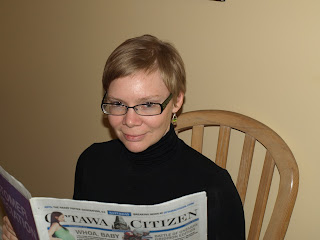 They are different beasts, fiction and non-fiction. At one time she thought that news and opinion writing may stifle her creative energies. Luckily, this was not the case. When asked if the process is the same, or if there were parallels, she described a little of the process and how they intersect.

"I don't write a lot of journalism longer than 800 words these days, but when I do, I tend to write and revise in chunks, and then take stock of the whole thing. I do outline, in all cases, although my outlines tend to be fairly skeletal. That's another reason I end up rewriting the first third, or first half, in fiction. Once I've actually got the protagonist's voice, the outline might need re-thinking."

Carpal tunnel syndrome humour aside, Heartfield truly does seem to write all day. Seeing what goes to print does not include drafts, editing, and correspondence. Then, once the day has slipped past and it's quiet, she moves into the world of fiction.

"I usually write at night, after my toddler has gone to sleep. I'm better at night than I am in the morning, so waking up super-early doesn't work for me. I do sometimes take a day off, but I find that if I get out of the groove, it's harder to get back into it. Like exercise. It's just one more thing I have to do every day."

To regroup and get out of an office chair, she tends her vegetable garden, enjoys yoga and walking the country roads with her son and partner. Of course, like any author and journalist time is spent reading for relaxation or research.


"My favourite books as a teenager are still special to me and I re-read them often: books like The Hero and the Crown, The Dark is Rising series, Dune, Playing Beatie Bow, the Hounds of the Morrigan. I used to read the Lord of the Rings about once a year – I've probably read it at least 20 times – but I haven't in a few years."

Research comes naturally to a student of journalism and it serves well in fiction too. Sometimes it takes a lot of reading to get the look and feel of a scene just right. She had visited Ireland as part of a UK vacation but specifically took a day to check out an old church which now lie in ruins, as a historical setting in her work. Not all of this world-building is so far flung though. Her story in Black Treacle takes place here where anyone can visit and envision the otherworldly syth-sounds of a scorpion band gracing the stage of our beloved Zaphod Beeblebox, a bar and haven on York Street in Ottawa's Byward Market. Why Zaphods?

"There are a couple of subtle clues in the story that it's set in the 90s (indoor cigarette smoking for example). I did that specifically because I spent a lot of time in Zaphod's in the mid-90s, and felt more comfortable with the bar in that time frame. I have a toddler now, and I live pretty far out of town, so I hardly ever get out to see live music. But when I met said toddler's father, he played bass in a local band and I spent a bit of time in band rooms, including at Zaphod's."

She has other work that is based in a far older version of Ottawa and may plan for a more familiar and contemporary view of the city in upcoming work. When asked to describe the climate for authors in the capital, she said,"it is what we make it. As a writer, I feel very lucky to have such a supportive community here. And Ottawa certainly has its ghosts."

Cheerful, sharp and curious, Heartfield just has "a healthy fascination with dark things," which she owes to a few factors. Her parents were understanding and let her devour books on a wide variety of topics. The earliest strange and truly dark thing she recalls creating was a collage in grade three of a bloody knife, noose and gallows, but horror and the weird was not a looming shadow by any means. "It's healing, dealing with dark matters. It's helpful as a spiritual practice to explore things you can't delve into everyday." She notes it is part of a balance to be able to understand the good and bad in life. Being able to see in the shadows is not necessarily terrible, but could be terribly necessary.

Find her bibliography on her website, as well as future appearances. You can hear Kate read her work at CanCon this year and the Postscripts to Darkness launch In October.
author Ottawa typicallydia