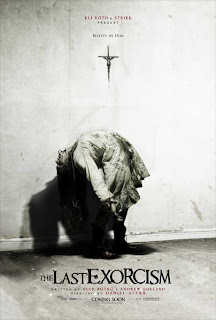 I had the pleasure of attending an advance screening of The Last Exorcism last night thanks to Ottawa Horror & Alliance Pictures. I'll be honest, I didn't expect much... just another formulaic hand held POV film capitalizing on the current trend of hauntings and possessions. Maybe it was this pre-conceived feeling that saved the film for me, but I actually quite enjoyed it.

"When he arrives on the rural Louisiana farm of Louis Sweetzer, the Reverend Cotton Marcus expects to perform just another routine 'exorcism' on a disturbed religious fanatic. An earnest fundamentalist, Sweetzer has contacted the charismatic preacher as a last resort, certain his teenage daughter Nell is possessed by a demon who must be exorcised before their terrifying ordeal ends in unimaginable tragedy."

"Buckling under the weight of his conscience after years of parting desperate believers with their money, Cotton and his crew plan to film a confessionary documentary of this, his last exorcism. But upon arriving at the already blood-drenched family farm, it is soon clear that nothing could have prepared him for the true evil he encounters there. Now, too late to turn back, Reverend Marcus' own beliefs are shaken to the core when he and his crew must find a way to save Nell - and themselves - before it is too late."

Like all those before it, The Last Exorcism hits the road running... no flashy intros, no opening credits. You're a minute into the film before you realize... oh shit, this is it. In this genre's infancy, dropping the opening credits "was" a way to create a feeling of authenticity, however, it's lost its original appeal and induces that "not another one of these" feeling. The documentary angle has been done to death, now its all about finding that angle that breathes a little originality into this fairly young, but somewhat abused genre. TLE fails in that capacity. The style of cinematography (if you can call it that) is but a carbon copy of those before it. Thankfully though, the camera movement is not as frenetic as other past entries... you may not need the Gravol. If you can get past the lack of originality (style), and embrace the film for what it is, there's actually a lot to like.

Daniel Stamm, best known for his other fictional documentary A Necessary Death, drums a very similar beat with TLE. To his credit though, Stamm manages to get very honest and believable performances out of his actors. Most of the cast have a strong television background and are relatively unknown to the big screen. Sticking to relatively unknown talent is a great way to help maintain that feeling of authenticity and makes it easier for the audience to suspend their disbelief. Although TLE is a by the numbers picture, it is competently directed, well acted, unpredictable, and genuinely scary at times.

The only problem I had with the film as a whole, is the ending. Although I didn't hate it, the last 10 minutes jumps off the tracks of an otherwise perfectly paced film. The ending is unpredictable, yes, but unfortunately it feels rushed and almost tacked on. Without giving too much away, it makes sense in the film's scope, but it's a tough nut to swallow, and generated a lot of groans in what seemed to be a full house.

Bottom line, although unoriginal in style, The Last Exorcism stands out with its excellent direction, solid performances, and original, sometimes comedic take on the exorcism theme. I enjoyed TLE more than last year's Paranormal Activity, and if you dig these kind of movies, I think you'll really enjoy it too!

AmandaTheCannibal said…
I agree with you! The ending left me thinking WTF? Although I did enjoy some of the scenes.

I will probably check it out again if theres an alternate ending on the dvd.