"My Soul to Take" Passes up for grabs!

Posted by Sonsey on October 05, 2010
Once again, the good folks at Alliance Films have graced us with preview passes. This time it's for Wes Craven's return to the Director's chair - "My Soul to Take" this Thursday, Oct. 7th at 7pm at Silver City.

"Wes Craven (A Nightmare on Elm Street, The Hills Have Eyes, Scream series) brings audiences his latest suspense thriller with My Soul to Take.  In the sleepy town of Riverton, legend tells of a serial killer who swore he would return to murder the seven children born the night he died.  Now, 16 years later, people are disappearing again.  Has the psychopath been reincarnated as one of the seven teens, or did he survive the night he was left for dead?  Only one of the kids knows the answer.

Adam “Bug” Heller (Max Thieriot) was supposed to die on the bloody night his father went insane.  Unaware of his dad’s terrifying crimes, he has been plagued by nightmares since he was a baby.  But if Bug hopes to save his friends from the monster that’s returned, he must face an evil that won’t rest…until it finishes the job it began the day he was born."

So here's how we're going to play it. First five people to email contests@ottawahorror.com with the title of any one of Wes' other films will win the tickets.  Contest closes Wed. at Midnight.
Good luck! 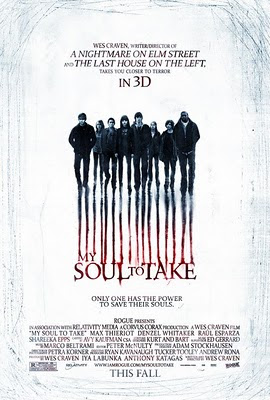 AmandaTheCannibal said…
I would love to see a little review of this movie. Now that you have seen it:)
October 8, 2010 at 8:06 PM