Posted by typicallydia on February 20, 2011
This is the first part of my meeting with Patron Saint of Plagues. They have some shows coming up, songs out, and are four very cool and creepy guys.

Looking up to a fifth-floor picture window and seeing the face of Opi Saint staring out over the city should put fear into the average and well-adjusted heart. Contrarywise, Ottawa Horror is nothing but pleased to see the frontman peering out, brooding perhaps, and waiting for another chance to tell a tale about Patron Saint of Plagues.

At first, I did not know who to expect. The straight-world version that Opi ominously refers to as ‘Management’? Or was I about to meet the possessed and psychotic clown that management refers to as ‘Opi’?

Luckily, I forged a meeting with the entire band at their blood-spattered lair. The band had a song featured on Rue Morgue Radio not long ago, and a marathon interview over two hours on CKCU radio, but the real news was the latest and greatest.

Patron Saint of Plagues will be supporting popular psychobilly ghouls The Creepshow April 14th at Mavericks. This is one in a string of recent shows where you can catch PSOP in the capital, but a real must-see for horror fans!

From dubious roots that may include mental institutions, (it depends on who you ask, and who is within earshot when you ask them) and likely mythical unexplained deaths, Opi Saint is the driving force behind the PSOP sound. Dead Boy, Dread and Bones could be dissociative splits from Opi, when you think about it. 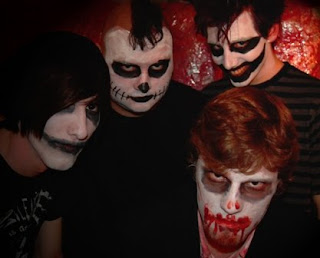 Creepy clown Opi is agent provocateur; his is the only sound you hear in the studio EP. The recorded songs that exist at this time, feature him alone. Live, he is the guitar and voice.

From somewhere, split Dead Boy, his bass, and looming presence. He has been with Opi for over a year and somehow manages to stay sane. Maybe that is why he does not talk much.

Now, Dread, the rhythm guitarist, is the best dressed of the gang (in his blood drenched suit). I have heard you should keep a distance from him, if you want to keep your plasma.

Keeping it all together on skins is Bones. When you look close, you can see a toned-down version of the joking plague-clown Opi, the quiet brooding of Dead Boy… and less of Dread’s bloodlust. A lot less. Maybe he gets all his aggression out on the drum kit.

Are they related in any way? When asked, Opi responds quickly, “No. Not at all. Not in the slightest. I would not want to be related to these fuck faces. No way.” But while he postures and denies, the band looks, nodding silently, ‘Yes’. “Okay, well, none of us are related in a blood way, but we are some kind of twisted messed-up little family.”

Their band name is shared with a novel that, while interesting, is unrelated. Opi explains it as “more of a title for all the stories… the songs… I did try to read that book though.”

Bones is shaking his head, “You have trouble with big words,” he says to Opi, “you know, like ‘fire, water, dark, black’ and ‘the’” Everyone laughs for a minute – the clown laughs the longest.

This nearly maniacal tension between band members is oddly comforting. One gets a sense that they are of little danger to the public since they have not slaughtered one another already. Opi Saint, of course is all at once the curious ring-leader but at the same time, a scapegoat being the brunt of much good natured and friendly abuse at the hands of his band-mates. The way they relate is part of the story of the origins of their very characters, and all part of the larger story told in their music.