Posted by typicallydia on February 22, 2011
Part II of my feature on capital-region band, Patron Saint of Plagues. Read part I if you missed it, and make sure to catch a live show.


From their facebook profile, “Patron Saint of Plagues is a twisted concoction of ominous tones and eerie melodies melded into dark story-tale like songwriting that touches on the very essence of the darkside of humanity and the terrifying thoughts that plague the mind of a psychopath.” Succinct. Gotta like that in a psycho.As any band, they jam regularly, practice rigorously and promote constantly. They make videos and have a wealth of biographical and visual information of their website.

Many horrific stories fuel their characters, lyrics, and stage performance, but as musicians they all pull from distinct tastes. Opi likes fast aggressive metal and industrial. Punk of course, figures into all of their tastes. Dead Boy listens to old punk and black metal. Dread grew up on rock and leans toward metal, and industrial. Bones seems to prefer punk and metal, but dabbles in pop music.

They are a mix of sound, and hard pressed to label the PSOP genre. Bones points out “with a lot of our songs, the lyrics can be morbid. The tune can sound happy, but if you pay attention to the lyrics you can be a little shocked.”

“The last time we played live,” said Dead Boy, “we had individuals a lot older than ourselves, in the range of 50 to 60, saying ‘we like what you sound like, but your image is a little outside of what we’re comfortable with’ but the sound was appealing.” He has also played the EP for older people who enjoy it as much as old Alice Cooper and other theatrical horror-rock acts, but figured they would not enjoy PSOP live.

Opi agrees, saying “I guess the easy way is to say that live, we are horror-punk, but recorded, it’s different.” 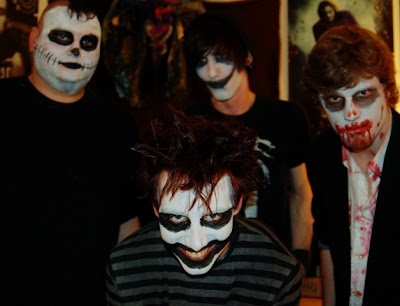 The songs, he said, are an “anthology style portrayal, like Tales from the Crypt, and Stephen King’s early work,” meaning they are stories woven around central themes. The musical style changes from song to song depending on the story. Of course, as there are common horror threads in the storytelling, there are common dark threads in each song’s style.

“All of the stories come from - and are about - a dark place that people should not go, but where I encourage people to go nonetheless,” Opi said, explaining that whether a song is a big or small part of the larger story, they are all entwined. They may not be chronological, since “we kinda just started releasing songs in that way, so some of them are less obvious.”

“We are going to start releasing new material live, and the recordings will come out after that,” said Opi. So between scheduling and playing shows, jamming and writing, PSOP will be attacking their adoring public in more ways than one. Without claiming a time-frame, Opi let Ottawa Horror know, they are “putting the final touches on a full-length album as we speak.”

When the theatrical blood is rinsed clean, and the hollow eyes are worn off in the morning, these Saints could be anyone’s neighbor. They may work or attend school. Some drink, some don’t, they are pretty normal guys.

At the end of the day, they are musicians with more creativity then most. In fact, they all have real names that I honestly meant to publish here, but the page I wrote them down on is mysteriously blank.