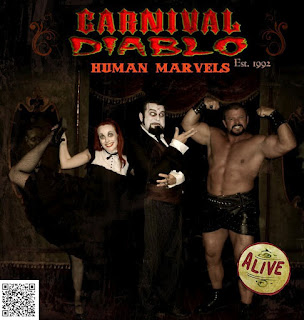 Those who made it out to the booth at the first Ottawa ComicCon (and thanks to all of you who did!) might have caught a little "sneak peek" from the performers of Carnival Diablo - Nikolai Diablo, Ophelia, and Colossus - in advance of their 20th Anniversary show on May 26th.

In honour of that show -which Ottawa won in a nationwide poll, beating out Toronto and Calgary- the folks at Carnival Diablo have given us THREE signed 20th Anniversary photos to give away. So here's how you win. Email us at contests@ottawahorror.com (bet you saw THAT coming) and answer this question:

"What does Nikolai Diablo do with the hammer?"


We'll take entries until midnight tomorrow (Tues. May 15th) and randomly draw the winners from those with the correct answer. Oh, and don't forget to get a ticket to the show - you don't want to miss THIS!

As always... stay tuned... we've got some really cool stuff coming your way later this week!